Okay, I gave up and finally updated my Word Press, managers of my blog site, and everything looks different. Will I be able to load photos? Lets check:

So far so good. Only took me a trip upstairs to find my old computer on which I found navigation instructions. I have no idea how the formatting on this new system will look when published. It’s a journey we’re on together.

Anyway, I took this photo this morning to illustrate the large bat-wing mower, powered by Fish and Wildlife, which is taking down the ocean of grasses and wild flowers earlier planted by same. The wild flowers did grow, but were quickly overshot by the Astoria bent grass, a troublesome invasive. They will spray with something called Springer, to which the flowers are supposed immune, in the hope to give the flowers competitive edge next year. We’ll see.

But the title of this piece is loss. Let’s start with David and Caroline, who arrived Monday evening, we being the first stop on their epic road trip to, well, that’s a good question. They hadn’t yet decided on Monday evening. But by Tuesday evening, when Larry and I had begun our watering system for the gate plantings (it’s Hot here, like high 90’s.) D and C walked down the road for an evening stroll and discovered that one of the calves had been stuck behind the barbed wire enclosing one of the streams. This would account for the loud, relentless moo-ing we’d been hearing all afternoon.

Larry and David undertook to crawl under/through the fence to, um, what? lift the calf out? Which probably weighs 200# by now, but, something had to be done. The land inside the stream fencing is rough, weedy, and, in my opinion, too dangerous for a couple of oldish tenderfoots to attempt. Didn’t listen, and, amazingly, the threat they represented to the poor lad caused him to scramble through the barbed wire, to no apparent ill effect. Momma came running, and we supposed the drama to be over.

But there are 16 calves, and we could only account for 15. Where was the last one?

Later that night, well after dark, the distraught moo-ing continued. A neighbor texted to say that she’d tried to get across the fence (a really really bad idea — not only barbed wire but electric — to comfort the cow (how do you even try to comfort a cow?) Bless her heart. This was enough to persuade Larry that we had to call Ryan, the cow’s owner.

He said there was nothing to be done until morning when he’d come over and try to find the missing baby. The moo-ing went on all night.

The baby was found the next morning. His head had somehow been caught in the watering tank. He didn’t drown, but suffocated. Ryan sent someone over to collect the body, and to amend the tank housing. He was philosophical, says loss accompanies the business, that the calf had not suffered, but died within seconds, that nothing could have been done to prevent his death. The cows were moved to a different pasture.

The neighbors have not been so sanguine. The tanks (four of them) were designed and build by an engineer from NRCS as part of the stream-protection grant. Something must be done. This seems such a human impulse. We will inform the agency of the problem. Meanwhile, the mourning continued through the days and nights, hard to hear. I saw Caroline walk down the road and try to extend human comfort to the mother, who stood alone in the corner of the field nearest to the tank. I do not know if her sentiment was received.

But. David and Caroline! What an amazing couple. Caroline believes that Hawaii is responsible for her cancer, or at least partly culpable, and so she doesn’t live there. Of course, that is where her home is, at least so long as David’s job is in Hawaii. So she travels. Apparently they have gamed the credit card points system to a degree that approaches genius. David keeps the home and the cats, and seems perfectly content with their arrangement.

They eat according to a plan that is narrow to disappearing. Caroline records every bite onto a digital site, and her will power can move the mountains, drain the oceans. She wavers not. And listen to this. Her entire wardrobe travels with her. Everything she owns. In two suitcases. Normal suitcases, not trunks. She is cheerful, mindful, entertaining. She laughs, she rescues each tiny insect and removes it outside. She believes in the transcendent. David adores her.

Now they’re on their way, perhaps to Canada, perhaps to Montana. We may or may not be advised. God speed. And our life sinks back into the comfort of habit. We have a real dinner, which includes, you won’t be surprised to hear, sausage. As we speak, Larry is outside talking to the crew we’ve engaged as a test to care for our lawn. The lawn looks beautiful. It has taken two men three hours to accomplish what Larry manages in an hour and a half. I’m not paying them for three hours work every week! Larry says. There goes my idea that he might relax and enjoy a game of golf every now and then.

The installation of sky lights in the attic/snug/whatever room goes on in fits. The actual installation is now complete, but the wiring of overhead can- lights may be undertaken next Wednesday. The wall-boarding? We seem to be a project that is slipped into interstices of the contractor’s real jobs.

Now it’s time to post this and see what travels across the ether. Sorry there weren’t more photos! Maybe next time? 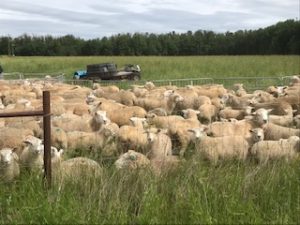 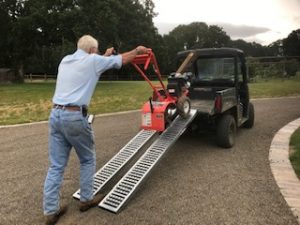