Their little house is here, though, of course, they are not. Pretty cute! 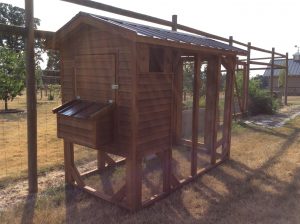 We’d ordered this from Central Oregon Coops, and the owners, Steve and Sarah Herbert, hauled it over to us Friday afternoon on a flat bed. While Steve put the segments together, Sarah told me how they’d gotten into this. Steve was working with his dad in home construction when the great crash of ’08 knocked the business out from under them. He used his skills to build a coop for their back yard, and Sarah was inspired to create a web site to see if there would be a market for them. Turns out, they caught the great back-yard chicken craze that swept the land and he suddenly had so many orders that he was able to make it into a full time job. Sarah went to work for an accounting firm in order to secure health insurance for the family. Nice!

They told us enough about chicken husbandry to turn Larry a little green — like how to “dispose” of the flock when they stop laying. Yep. Wring their necks, toss the bodies into the trash, although one could always use the hatchet on a stump method.
No, you can’t introduce a new adult chicken into the flock if one is lost to an eagle or fox. They’ll kill the new-comer, pecking it to death. If you lose too many, you’ll need to start over next year or buy an established flock. Where to buy established flocks was not made clear. Laying hens are not good to eat, so don’t bother. If a hen gets broody, find her eggs and do not let her try to hatch them. Ever since I mentioned chickens, Pinterest has been tormenting me with advice, but I haven’t noticed any pins about what I suppose is the reality of the thing, see above.

“It’s easy,” Sarah and Steve say as, full of good humor and sunshine, they drive away to leave us alone with our thoughts.

The first of these being that the coop is in the wrong place. We hadn’t visualized it well enough to understand that the roof can’t fit into our orchard, as we’d planned. But next time we see Grant, we’ll ask for his help in moving the structure around to another side of the orchard where it should be more convenient. Then we’ll sail away on our Baltic cruise, putting the acquisition of actual birds off while we see the cities of ancient Europe, and a ballet performance of Swan Lake in St. Petersburg. I don’t anticipate that my college minor in Russian will be useful, though I once imagined that perhaps I would have this very interesting multi-lingual international life. Right. You were young once, too.

Larry’s garden looks lush and productive, from the distance of the driveway. Up close? Well, those zucchini haven’t gotten any better, the second planting beans simply refuse to prosper, the withered tomatoes send out an occasional fruit, and we almost made the mistake of the year. We wanted to continue the fence which lines the road and circles the house to enclose the garden as well. This will be augmented with a hot wire, because the cows will simply lean against the wooden rails to scratch their backs, potentially pushing the whole thing down. All good, and the fence is in place, the hot wire buried to allow machine access through the gate, but with no way for a simple human to get in without taking down two wooden rails lining the drive, unhooking the wire, then repeating the process into the garden. Oops. But Ian figured it out, and will build a man-gate in a corner by the lawn where there is no electric wire. Save!

It’s been so hot, as you probably know. Don’t want to do any work in the daylight hours, but we do love to sit out and watch the sun go down, count the stars. We hired a landscape service to come and provide watering to our porch plants, but, sigh, the system is drowning the geraniums,etc. Fine farmers we turned out to be. Can’t even grow zucchini? Seriously.

But I’ll close with a photo of the sunset I’m talking about. We’re not discouraged! 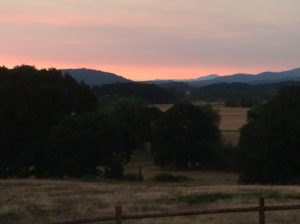 Why not go to a banjo band concert at the Sweet Home Veteran’s Club, if you want to celebrate Americana? That was our thought, too, so we did. After all, my life with the banjo had begun with The Rose City Banjoliers, and Uncle Carl’s wife Reg’s little tenor banjo retrieved out of My Mom-in-Law’s attic one hot summer day.

I looked up banjo lessons and found Eliot Sweetland, who, after a year or so, offered me a place in the band he led. Imagine 20 banjos, an assortment of washboards (always played by band wives), and a tuba, in one room. There’s a joke in there somewhere. I stayed with it long enough to ride a float in the Rose Festival’s Moonlight Parade, felt I had reached as far as might be possible, and put the banjo away. Fast forward: See, what I had actually wanted to play was Bluegrass, and for that, a person would need a banjo with an additional string. I heard of a man in Pendleton who made banjos, Verne Marr, and soon had a sweet little instrument scaled down to my hand. Lessons? Yes, but. Not very satisfactory (or was it my lack of talent?)

I was told of another band, which played Traditional Jazz, and which needed a banjo player. Sunset Traffic Jam Jazz Band. I dug out my 4-string, trad banjo, and played with the band for maybe a thousand years, until I decided I no longer wanted to be the band manager, financial officer, marketer, scheduler, and finally learned of another band in which I could just play the banjo. Now you’re up to date, and yesterday, we came full circle. 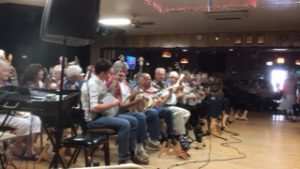 It all came back. The music (if you can call it that), the atmospherics, the Darling Twins singing “You Call Everybody Darling,” the jug band bass players, (but no washboards), a tuba, the guy in the front row with the flag shirt, the waitress who, in fact, called everybody darling. They were scheduled to play for three hours (!) and perhaps they did, but we found one hour was just about the right length of time and found the exit.

How did you celebrate the 4th?

Back at the farm, the fence building is marching along. Today saw the delivery of a truck-load of gravel, which will enable the cows to cross the streams without muddying the water. The posts are in, and a crew was busy securing the corner posts. Larry had been in Portland, so when he got back we went for a walk along the fence lines to check on progress. We find that our 6600 trees and shrubs are in need of either spray or weed-whacking, as a bumper crop of thistle and tansy is springing up right along with the salmonberry, cascara, nine bark, and so on. After trading calls all day, I finally connected with Adam of Cut Away Inc., who’s profession is brush-cutter, sprayer. He’s coming by tomorrow to talk about keeping my “boulevards” clear, as well as free the fence lines from over-hanging blackberry, serviceberry and so on. On our walk, Larry and I passed one of the downed oaks, now completely smothered in thistle, with blackberry waiting for an opening. Wonder if this Adam will be able to tackle this kind of mess. Fingers crossed.

Here’s one of the fence corners: 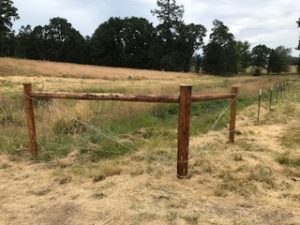 Looked more interesting in real life. It wasn’t that much fun pulling the devil’s darning needles out of my socks after out trek, so not much was gained by going on a cross-country walk.

Now, you are probably wondering how the Vision Garden is doing? First produce: 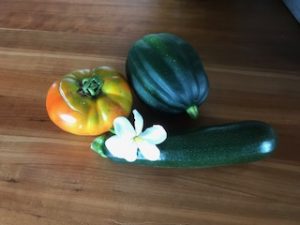 Pretty? But alas, the zucchini is profoundly bitter. Huh? Googled it, of course. Do NOT eat bitter zucchini unless you want severe abdominal pain . . . Well, no. Don’t want that, but in fact, I can’t imagine eating anything so toxic smelling anyway. Rats. What causes bitter zucchini? Apparently random events, like not enough water, uneven water, bad seeds, bad dirt, take your pick. Just don’t pick the squash. So, along with the desiccated tomato plants, the dead pear tree in the orchard, the cherry trees stripped of fruit by birds, we’re not doing very well.

But we soldier on! And now the hot dogs are off the grill and I’m out of here. I just noticed that my first post was in June of 2014. So I’ve been writing this for 4 years? Guess so. Hmm. What do I think about that?