“What cha doing?” I ask Larry. I’ve wandered into his office looking for a postage stamp. He sits at his computer with a yellow legal pad on the side.
“Mmm.” He takes a moment to finish making a note. “Trying to find prices for a pick-up truck.”

And there we have it. This is what happens when you buy an apple tree. Two apple trees, because, you know, they don’t just pollinate themselves. Or so I thought. Actually, some apple trees are self-pollinators, but as it happens, Pristine and Liberty are not.

I’ve spent some time at my own computer, researching our new acquisitions. Pristine and Liberty are both “disease-resistant,” which seems a little vague at the moment. Whom or what should we be watching for. Moths? Scab? We don’t want to use spray, but perhaps that is an example of naive rookie wishful thinking. But okay, so far so good.

Next, will these two pollinate each other? Um, no, say my on-line sources. Okay, then, which tree do we need to add to our collection? Good news: Pixie Crunch will pollinate both. This seems to be a nice little apple, good for lunch boxes. Hope our garden store carries, or can get this fellow.

But let’s take a minute here to turn back to the web and see exactly how this pollination will occur. With bees, right? Yes. Or wasps or flies. The wind? Hmm, unclear. But the trees must be planted within 100 feet of one another. Check.

Now, what about the deer and elk who roam our property? Don’t think any fruit trees are ruminant-resistant. The trees will have to be protected by fencing of some sort. Ah. But we have to get the trees into the ground long before there will be any fencing other than the electric wire which contains the cows. I don’t suppose we can surround the trees with little electric girdles out there on the lonely savannah. On Tuesday, at the farm, we’d taken time to visit Island Fencing. We need to consider what sort of fencing we need alongside the driveway anyway, and had been told to ask for Steve at I.F.

Steve may be as good as Ken, the power-shovel guy claims, but we haven’t yet impressed him with any reason to demonstrate his skills to us.

“What about this fencing?” Larry asks, pointing to a photo on display.
“Don’t recommend it,” says Steve.
Then why is it on display . . . oh, never mind.
“Can you help with deer fencing?” I ask.
He seems startled to notice that I’m able to talk. A woman, and all.
“Maybe,” he says, and turns back to Larry.

We gave up, took a card and left. Went to have lunch.

Back in Portland, at my computer, I move on to the subject of pruning. Lots of good info on many sites. We’re not ready to acquire the recommended tools yet because, first things first, it’s about that pick-up truck. (I did learn about an intriguing product named Sucker Stopper — a succinct, if not poetic name.) Need to get the trees from the garden center to our property, and that’s just the beginning. If we buy a truck, where will we keep it? No room here at the Crane Building. Yes, we could have the center deliver the trees, if the road gets finished before the rains close us out. And so on. Well, I love it!

More tomorrow, in which we build our own private Autobahn. Photos included!

How could we have known, back then, that we would fall in love like this? France with friends? Of course! Meet the Schefflers in Quebec on the way home? Great idea. And then we bought the Hundred Acre Wood, and everything changed. We came home to gray skies, green fields, and let’s face it, this is Oregon, to rain. Here’s the view of fields along Llewellyn Road. 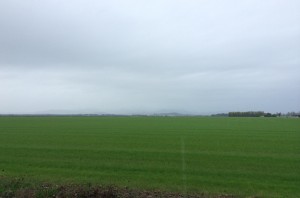 We meant to build a driveway to the house site. Tried to get it done before the fall rains, but there we were in France during October’s best weeks of Indian summer. Contract signed, road guys Ken, Justin, and Spenser ready to go. We raced home from Toronto the day of the 21st. “Raced” not quite the right word, as United Airlines had other ideas about lofting us across the continent. Ugh. Airplanes! We got home at 6:30, dumped our baggage at 720 14th and drove to Corvallis in order to meet the road-builders on our property at 7:30 the next morning.

“Holy Moly!” Larry exclaimed. (A Minnesota expletive, or maybe North Dakotan? Not sure) as we pulled into the old house lane and saw this: 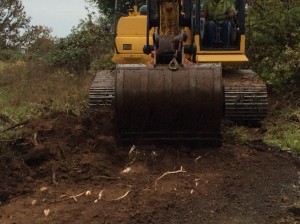 “We could land an airplane on that sucker. We’re building a driveway, not a freeway.” Turns out, the “driveway” has to be 16 feet wide. Seriously? A freeway lane is 9 feet, so . . .?

I’d thought the driveway would be a little two-track affair, with maybe bluebells blooming in the median. Cows grazing alongside. 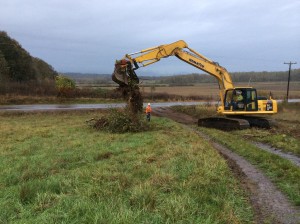 With the rain pounding down, work would be suspended as soon as the rock arrived. And here it was. I love this. Click on the photo to see why. 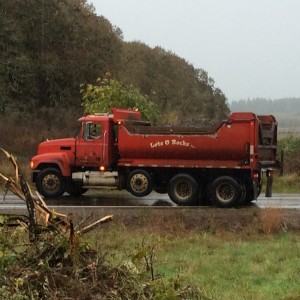 So who told us we need 16 feet? Not the county, we discovered. They only care about the first 18 feet off Llewellen, and the rest is up to the fire district. Chief Ray Hubbell sat us down, and with the patience of a 2nd grade teacher began to explain. I didn’t take his photo, but he was kind and patient, talking to the old folks here. Honest! We both wore muddy boots, sodden jeans and dripping rain jackets. Thought we looked like locals, but he knew better.

Anyway, 16 feet to allow the fire trucks to reach the home. Nope, not legally required, but try to get insurance if you don’t comply. Sure, make any proposal you want, but if we don’t approve it, we don’t have to answer the alarm. Unless someone is trapped inside, we let it burn. Who’s your insurance handler?

Well, we already had agreed to the contract at 16 feet, so if it looks ridiculous, if it looks as if the terminal will be Donald Trump’s country home, that’s what it will be. But as no further work will be forthcoming until next Monday, if the storm blows over by then, Larry and I headed back to Portland.

But on the way, we stopped at the garden store, just to ask about fruit trees. And here’s the good part of this report: they had a few trees left out back, already potted, 30% off to make room for the new shipment coming in November. We should get two which are compatible pollinators, and disease resistant. No, no Honey Crisps, or Macintoshes, unless you want to spend the winter spraying. Instead, we bought one Pristine, one Liberty, at $31.92 apiece. They will stay at the store until we can pick them up.

Pick them up? But how? Next blog: The complexity of simple.