Hooray! Sixty gallons a minute! That’s huge! We don’t even need 60 gallons a minute, so will install a 20-gallon pump, enough to water the apple trees, take a shower and simultaneously run the washing machine. We don’t yet know the quality of all this water, so will have to run a so-called 4-hour flow test, as mandated by County, and test the water for purity. Four hours of water flowing at 60 per is one heck of a lot of water to waste, so we hope they don’t quite mean what they say.

In the meantime we have to question if we even own this property. Thought we did, until Brett (new well guy) phoned County to be sure his drilling was approved for this site, and was told that they’d never heard of this Larry Viehl person. Nope, the land under consideration belongs instead to the people who have just bought the twenty acres across Llewellyn.

But, but . . . we have a Warranty Deed to the land we bought! What the heck? How can this be? The sale has been duly recorded, etc. So Larry called the title company with this little situation. And by the way, taxes are due, where’s the bill for the taxes? Title Company calls County. No one will admit to the error, and now the attorney for Across Llewellyn is involved. We aren’t really worried, it’s just a nuisance, but another reminder to mind County very very carefully in our dealings.

With the well dug and the road built, we move on to consideration of the house plans. Met with Rod and got some new sketches, some improvements. Not that it’s all that easy to meet with Rod. He works in a office adjacent to his home clinging to the side of a hill over the Willamette. First you have to find his driveway, and then negotiate the thing. You hope that your car doesn’t miss the hairpin turn off the top and plunge, catapulting end over end to Macadam Avenue below.

It’s fascinating to watch him manipulate his computer program and show us the living room end with windows or French doors. With or without “eyebrow.” I asked if I could post his sketch on my blog and he agreed, with the caveat that I should add the following: “If your last name is Viehl or Ederer, you are free to comment. Everyone else, keep your own council, and above all, please do not email Rod with suggestions for changes or additions.” Says the voice of experience. 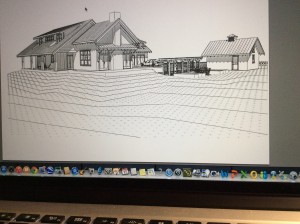 The only way I could manage to show you this computerized sketch was to take a photo of my computer screen and move it over. Hence the bits of computer in the image. Now you just have to imagine the apple tree.

“Okay, Ma,” says Pa. “Guess that’s it for the winter. Just tuck ourselves in and wait for spring.”

Not quite! Next up, fences. And cows. The cows are coming back. The old house has to come down. What about that pick-up? Right. But here we are in Sacramento on the way to Pasadena for some celebration. I’ll leave you for now with a photo of the site where the little house is to be built. 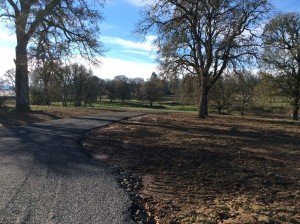 To the farm on Friday last to meet with Jones Drilling, out of Lebanon. (But only after one of our Larry-and-Jane comedy routines involving a pedicure, a trip to Home Depot, and a couple of clueless “estheticians.”) Seems that Joe, former well guy, has abandoned us. “Can’t do it,” he’ll say. “Too muddy. Bye.”

Fine. Ken, road guy, recommended Jones Drilling, and as they were on the first list acquired from the realtor at the sale, Larry called, and Jones himself would meet us on the property to have a look. Brett, actually. Nice guy, but they’re all nice guys until proven otherwise. As some of them certainly are. Proven otherwise.

Now. There’s a perfectly adequate rest stop a dozen miles or so past Salem, and it has been a good idea to make a precautionary stop most days. Still, it’s cold in there, often crowded. You know, our fellow Americans at their best. And so we have created a rest stop of our own in the barn/shed by the expedient of placing a roll of toilet paper in a plastic bag behind a protective half wall. Straw on the floor. Private.

And the driveway looks amazing! As if it’s been paved, but it’s just rolled. Smooth and sleek, I don’t even want to walk on it with my muddy boots. And all around for some yards, the earth has been dozed, so there’s plenty of mud!

Ken looks with disbelief. “Cow poop,” he says. Who doesn’t recognize that smell? If further proof was needed of our deprived, urban background. “Don’t worry, a few days of weather and the smell will be gone.” It’s just cow poop, for crying out loud. 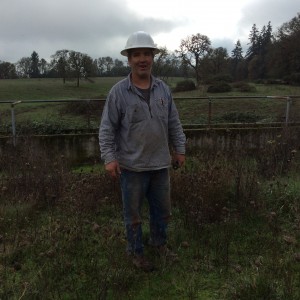 But he brings to our attention exactly how attractive this shiny new road will appear to passers-by. Perfect place to have that party! Bust out the six-packs. Out of sight, we could even dig some cookies? Better than driving on the beach! Smoke a little dope? Shoot up? Awesome, dude.

So ends the idyll. We’re in the real world. What to do?

We have to have a gate. I want to locate it at the edge of the ravine so than no one can just drive around the fenceless gate, hop back onto the road and cross the gully. Which certainly can’t otherwise be driven across, or even really hiked across. But Ken vetoes that idea. The gate needs to be at the top of the rise where anyone on Llewellyn can see if some miscreant tries to use a bolt cutter. Anyone trying to drive around will simply sink into the mud. His view prevails, and he will put up the gate with a couple of those farm gates lying about the property. We simply need to find a hardware store to pick up some heavy-duty chain and padlock. 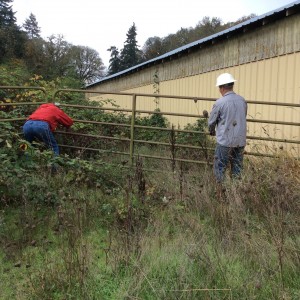 But first, Brett has arrived. He appears very competent, business-like. He’ll drive us up to the drill site in his rig, across the older path we’ve used all summer. If he can. He drives very carefully, head out the window, and we manage. He spreads out the charts prepared by the sounder, Tim, (remember him) on the hood of his truck. Says he’s worked behind Tim before, but the system isn’t fool-proof. Still, someone needs to pick a spot for the second attempt, and he’s happy to go with Tim’s pick. The question will be whether he can get the drill rig up to the site. 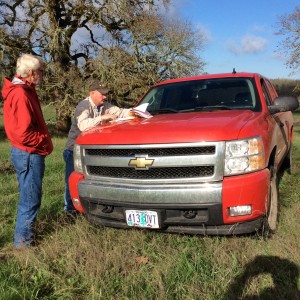 He decides he will try on the following Monday, as the weather report looks slightly promising at that point. If he can’t get the rig out, though, would Ken’s crew leave a dozer behind to pull him out if necessary. So we ask for a bid, exchange bona fides, and he leaves. Drill site below: 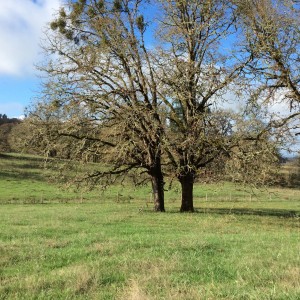 Larry and I find the farm store, get the chain and padlock, return it to Ken and leave for home.

The next days are busy with Portland stuff, and we can’t get back down to have a look at the gate. Which is not really a sufficient reason to go, anyway, so we attend to business here. You know, the Dreamer Gala/Auction, the French friends dinner, the gig. On the way to the gig, Larry told me that it was premature, no guarantee, but he’d gotten a phone call from Brett. Looks like 20 gallons from the new well! But it was dark, and Brett couldn’t tell for sure until the next morning. Which is now. The wind is howling, cold, we’re expecting an ice storm this evening, but Brett hopes he can get the rig out safely this afternoon, and will call us with the actual numbers. Fingers crossed!

The Comfort Inn is fine, really. Yes, the carpets are pretty tired and the elevator groans, and the view from the window is the Chinese restaurant across the lot. But the people are nice, and the breakfasts are really good, and they had Larry’s clothes safely installed in the room. He’d left a few things in the closet after our last overnight in Corvallis, so we had to stay there again Monday night. It could happen to anyone.

But getting lost in the motel’s corridors? “I’ll meet you in the parking lot,” Larry said, “if you’ll run back and leave some money for the cleaning ladies.” We both should have known better. I have a recurring nightmare in which I can’t find my car in a parking lot. Last night’s dream featured a lost book, which I realized was probably in my lost car. So it shouldn’t be too surprising when I can’t find my way out of a motel.

But early on Tuesday morning, here’s what we found: (Be sure to click on the photos) 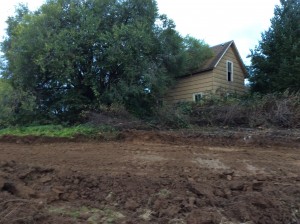 The “driveway” will take us past the old house, which of course, will no longer be there after this winter, if all goes according to plan. It’s shocking to see what has to be described as the assault on the land. Those huge machines! Today including the shovel, two bulldozers, a roller and about 50 rock trucks. Maybe not 50. Let’s say a lot of trucks.

There is a serious cleft in the land which has to be culverted in order to access the upper acres. Even the cows have to go around. But the path of the driveway is ordained by the floodplain to the east, so great pipes will channel the water under the road bed, or so we hope. 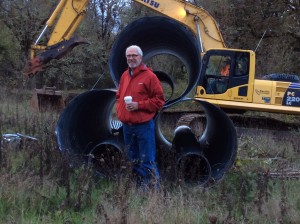 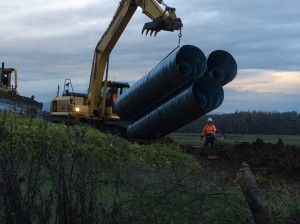 The land isn’t all beautiful oak trees and grassy fields. There’s a dump of old farm junk in the ravine behind the old house, weeds, trash, and about this we can only imagine how it will look, later. Everywhere are these old gates, which we hope to put to good use at some point. 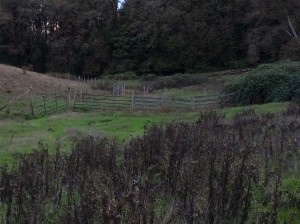 The day proceeded, and we waited to hear from Ray Hubbell, the fire marshall, as he holds our future in his fist. He wanted to come out and “make suggestions” so that we may bring our project into compliance. It’s not just about the 16 feet width. Nope. There have to be these “turnouts” for the fire trucks, and a new twist: the grade cannot exceed 15% on any slope. And, he tells us, “this” one looks like 20% anyway.

He marches along with his roller device, measuring the number of feet between the mandated turnouts. And we’re lucky! We need only three! In addition, of course, to the turnaround at the top and the entry from Llewellyn. Which is not wide enough, he says. “We’re not through yet,” Larry tells him, through gritted teeth.

Now he says he’d like to evaluate the old house as a candidate for a “burn to learn” project for the fire district. We’d like to accommodate, of course, but as he narrated the scenario, it became clear that the district could burn the house only if Larry’s dead body were already stretched out across the rat-chewed, moldy sofa when they did so.

The rains threatened, and it became clear that the road building would have to be put on hold until perhaps next Wednesday. They’d gotten so far as the second culvert installation. Fire Marshall Hubbell handed us a scratched note, provisionally approving the route of our little autobahn, and we all said goodbye. Here’s where we are as of right now. 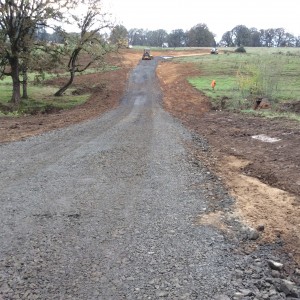 And to end on a brighter note, here is the view from the new perspective: I tell myself that the land will heal! 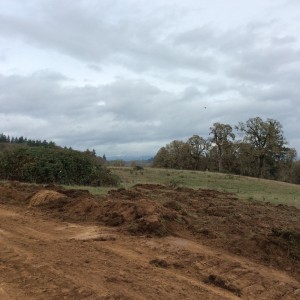