Spring must be a busy time for you farmer folk. What do you do all day, for example? Milk the cows? Plant the potatoes?

So today, May 22: We walk down the path to check for wild flowers, and find: 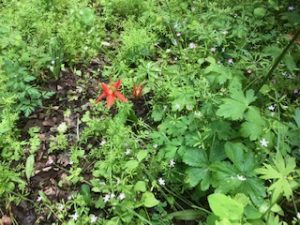 Columbine, just a few. On down to the wetland: 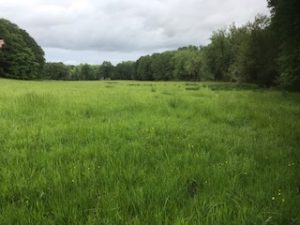 The clouds burn off, but we’re too late to see the wash of camas that our friend Terri described from her trip down here last weekend. (Don’t ask. Kind of a sore subject.)

Nothing for it but to pull on our overalls and clean the shed: 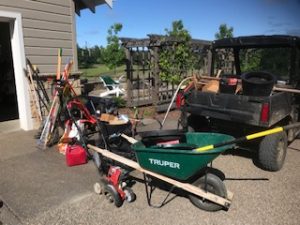 The shed has become the junk drawer of farmer stuff, starting with the ATV, push mower, rototiller, edger, weed whacker, and assorted rakes, shovels, barrels, chicken feed, nesting material, well, you get the idea. Friend Tommy has told Larry he’ll want to build a barn up by the house one day soon, for the now obvious reason. As it is, stuff we need has a way of forever being in the wrong, inaccessible, place. I don’t see this happening, honestly, though? Hmm. A new, real barn-like barn could be cute, don’t you think?

A couple of hours later: 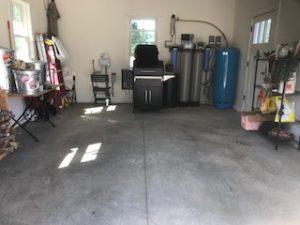 We put all that stuff back, determined to install hangers for the rakes and shovels. For now, they resume leaning against the wall. I have washed the dirt off the tools, but I know Larry will not make a habit of cleaning them as he uses them, so promise myself that I’ll take care of them in the great fall cleanup. Months from now. Because now it’s time for lunch at Block 15 down the road: 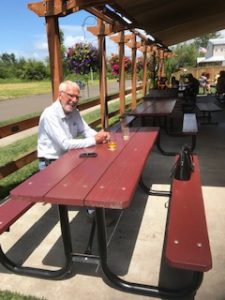 Larry will leave this afternoon to drive to Black Butte, in order to go fishin’ Thursday with friend Robb on the Deschutes. He has, however, sustained a mysterious injury to his leg, apparently from an errant golf swing. A trip to the Good Sam Walk-in clinic, to a referred PT, a program for exercising the muscle/tendon/whatever, some Alleve, and he’s been able to get this rudimentary farm work done, but how will it be fishing?

Don’t worry, he says, all he has to do is climb in and out of the guide’s boat. Tell me not to worry? Okay. But how about golf next week at the glorious BBI golf tournament? The 40th anniversary BBI? I don’t worry, exactly, but I think he won’t be happy. Will try to golf anyway. It will hurt. Hey, farmers can’t be engaging in activities that are so dangerous, like golf, right? 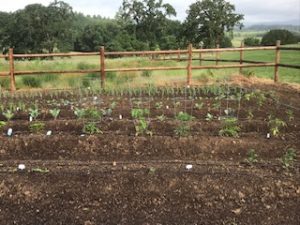 I’m writing this on my new “downstairs” computer. In anticipation of wanting a computer up with my banjos, in the to-be-named space formerly known as the “snug”, the “attic”, the Chick Room, (I was never on board for that one, that was the Parker Furniture appellation). Yes, you know how this has gone. I first engaged Simply Mac in Corvallis to move the info from the old machine to the new (okay, I did try it myself first. Again, hahaha.) But Mac could only go so far. Count the hours on the phone to Comcast, pleading with them to remove the “sign-in failed” message blocking the arrival of email to my new machine. But yesterday, a return trip to Simply Mac and somehow, the evil Comcast has been vanquished. However, thru the miracle of this time we live in, the blog has moved over, settled in, and with a few hiccups, here we are.

Last post, I was on about how the first vision had been completed with the addition of a crab apple tree. Well, not quite. Of course we knew that it would be more difficult to enjoy the easy friendships with our long-time beloved “people.” Vik and Gordon, Julie and Robb, Sally and Bob, Soupie, Dinah, Diane and Dick, Nancy and Mal, Larry’s Columbia buddies, BBI guys, my band guys, just, you know. Our lives. Nothing can replace the warmth of these constant friends.

So we traded. We won and lost. I don’t say we’ve lost our friends, as we depend on them and love them as before. I just can’t call Vik and see if she has any extra pickles. They can’t call us and say everyone’s meeting for dinner, come on over. But something nice has happened. We’ve met some shiny new friends, who are making our farm life much richer. First, Terri, who has been good to me, and now, Marjorie and Ted. Both Larry and I like and enjoy both of these two. They’ve taken us on nearby hikes, introduced their family, consulted on important chicken establishment issues. They like to laugh, have interesting back stories, and we are lucky to count them, now, as friends. Marjorie and I went to lunch yesterday, and she, now acquainted with my blog habit, said she hoped she wouldn’t find herself in my writing. Sorry, Marjorie, here you are.

Just checked in with Larry, who’s on his way home. Caught the first fish! Perfect. Someday I may understand the magic of this activity, but for now? So long as I don’t have to join him, who cares? Have fun! Come home safe and dry! The end. 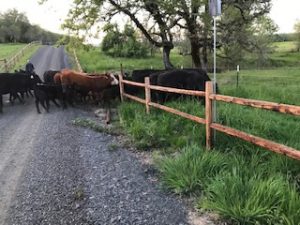 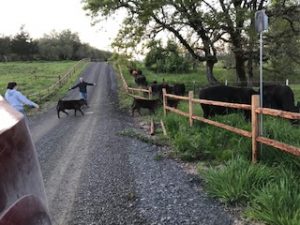 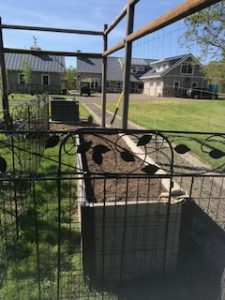