What? I hear clucking? Not possible. I’m in the kitchen, well, cooking eggs as a matter of fact. So I’m imagining things, right? No. I do hear clucking. I can’t hear the coop from my kitchen, so, what? I look out the window at the coop and see only Edith. Apparently Sally has escaped somehow.

Into my boots, dried corn in hand, I head around to the back of the house, and OMG. It’s Henrietta?!! This isn’t possible! But there she is. Feathers ruffled alright. ??? I coax her back to the coop, where Edith and Sally, anticipating the corn, shrug, move over and let Henrietta’s head join theirs in the cup.

What the hell happened here? No clue. Feathers strewn in the orchard? Maybe she’s molting? But the closed door, the night outside in the frost? Make that three nights for Mademoiselle Henrietta. Really, maybe an owl and she escaped? We’ll never know. Maybe she’s just laughing at us, thinking we can secure the orchard? Has she learned a lesson? I expect Sally may have something to say about all this. We’ll see.

Anyway, who was it who said rumors of his death had been exaggerated? Sorry, everyone. Now, back to the skillet and my scorched eggs. Hooray! ! !

This morning I have to tell you that our little French hen has been taken into the Great Chain of Being. I suppose it must have been an owl, though I am not a chicken-crimes forensic specialist. I should not privilege one bird above another, and am glad it was not a skunk or weasel that took her, but I can’t escape a feeling of responsibility. I depended on the work of the automatic door, which somehow failed and left the chickens out in the orchard all frosty night, exposed and cold. Why didn’t I check last night to be sure all was well? Aaargh!

It wasn’t quite daylight when I walked by the far window with my coffee and saw the dark forms huddled against the far fence. What the heck? Slogged into my boots and made the discovery. No body, no blood, just feathers, and two frost-bitten sad survivors, who didn’t run to greet me as they always do. Their feathers were icy, and the door to the coop resolutely still closed. Don’t know how to warm a chicken (no jokes about the microwave here, let’s be sensitive) but called Larry, back in Portland, retrieved the red thumb-push which opens the auto door and teased Edith and Sally inside with some corn. I hope they found their way up to the warm straw-carpeted roost.

Now I’ll have to tell Pat. See, the lovely, generous Pat Hills has volunteered to chicken-sit while we’re away in CA for Thanksgiving. She stopped by on Saturday to get the instructions for their care. She had reached the farm ahead of me, and I found her just coming in from the orchard. She’d been taking the chickens for a walk around the orchard, teaching them a song. Seriously, isn’t that the best? We’d thought we’d just depend on the auto-door while she’s here, but now I’ll have to teach her how to manage it manually each night. I hate to tell her about Henrietta, though.

And why was I late getting here on Saturday? Larry and I had met at Charbonneau to visit an open-house, our first foray into the inevitable move from the Portland condo. No, dear Reader, we did not like the open-house condo, and Larry has proposed another scenario we’ll have to consider. How about renting a place in Charbonneau? No commitments. Hmm. A visit to the Web reveals a rental option there that doesn’t look terrible on line. Sigh. Here’s the thing. This weekend, Larry has stayed in Portland so that he can get to his monthly Monday breakfast with the boys from Columbia Mgmt. He has said repeatedly that he will not give up his normal Portland life in favor of the farm. That means golf at Pumpkin every Sunday, breakfasts with his friends, Symphony, Center Stage, random visits with our buddies, coffees with various members of the community who look to us for donations. And so on. Just the urban scene. Fine.

But it’s getting harder, as he is, I believe, ever more deeply engaged down here. Now, this stretch of urban life was to include breakfast with another set of old work colleagues on Tuesday morning. But we’d bought tickets to an activity here called Pub Talks (I think. That doesn’t sound right) for Monday evening. Let’s see. Drive down Monday, back to Portland whenever for Tuesday breakfast? Tough call. He gets frustrated and angry. I don’t know how to help.

But here I am, alone on another frosty morning, biting myself on the butt about Henrietta, and I’d still rather be here than anywhere else in the world.

Good morning. It has come to our attention that a certain amount of scratching and scribbling at this site has included observations of our little flock. We think it important to add our voices to this reporting. Let me introduce us. I am Sally, leader of and spokesman for the chicken population on this farm. Edith and I have been together since the beginning of time, and Henrietta joined us at what we call the Great Awakening. We were moved into our present home together, but it has taken some time for us to adjust to the point where we can consider ourselves a flock.

We employ a pair of humans, as I believe they are called, for light maintenance and housekeeping. For this they are compensated with a daily selection of eggs, the purpose of which is unclear to us. The eggs are not living, and will never result in chicks. But the look on their faces as they collect what is owed them is one of reverence. Well. This arrangement is of course, weighted in our favor, as the human’s services are purchased by that which is, honestly,worthless.

Our coop is pleasant and opens onto an orchard in which rather stunted trees of some indeterminate type grow. We mine the soil for grubs and worms, but so far this has proved unproductive. However, there is a structure inside the coop itself that flows with, as it were, milk and honey. The same for water. A mysterious door opens to the orchard, and similarly closes, from time to time by some intelligence undetectable to us.

Our amusement is as might be expected. Scratching, airing our feathers, roosting in the dark hours. But we are gifted in the opportunity to watch the antics of our human employees. They are a rooster (is that the correct term for their species?) and a hen. The hen is friendly enough, and often brings us treats. Now that Henrietta, the little French immigrant, has properly learned her place, we even allow her access to these delights.

Last week, we had a most enjoyable show as the rooster-human crawled around in the dirt, lugging lengths of tree wood up to our garden, cutting it into lengths with a most fearful machine, and placing the pieces along the perimeter of our orchard. The hen stands uselessly by, sometimes offering him a tool of some sort, which he uses to secure the wood to the wire fence. Who knows what the purpose of this exercise may be, but we suspect it’s in the deluded belief that we may be deterred from digging under the fence, and thus expanding our territory.

It was Henrietta who first gave us the idea that there might be better hunting outside the perimeter, but what happened next is quite delicious to tell. Great pandemonium erupted when the rooster noticed her doing a bit of exploring. Yelling ensued, and the hen came from her coop next door with a vessel of cracked corn, which she offered to Henrietta, As she proceeded to open our door and pour the corn inside, Henrietta of course joined us there in enjoying the treat.

As you will imagine, it didn’t take us long to recognize that in this way, we could manipulate the appearance of the treat, at a time desired by us. Isn’t it fun? And here’s what’s so amusing. The rooster with all his log rolling and stapling seems to believe that he is in some way preventing us from exercising this control. Is he unaware that we can fly? 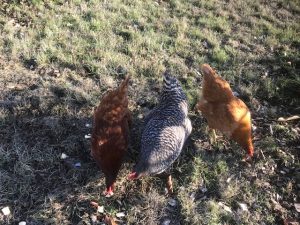 Now that Sally has had her say, I, Jane, will take back the pen and resume this narrative. It’s a beautiful fall day, but I’m stuck inside waiting for my cherry tart to set. We’ve come under the spell cast by the Great British Baking Show, and the thing has invaded even our language. “Mary and Paul would like you to bake a cherry tart. It must be free form, sugar and gluten free, with cherries hand picked by Japanese maidens and . . .” This has to stop.

Meanwhile, Larry is outside sawing away on the so-called heritage site. 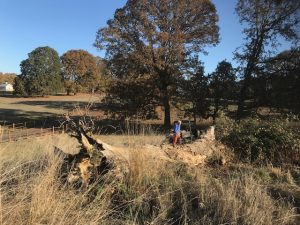 I’ll be able to get out there and enjoy the sunshine as soon as the everlasting tart shows signs of done-ness. Otherwise, cherry tart soup? It happens.

Work has begun on the perimeter fence and path. Adam, Brush-clearing Guy, is somewhere unseen, but heard, working to clear berry vines, branches, whatever, from the outer side of the fencing. He plans to heave them over the fence to the inside, then mulch the debris to become my “boulevard.” Unfortunately, the conservation folk have adopted that phrase and use it to remind me of my pretentions. Okay, laugh, boys.

And now the sun is setting, as have my cherries, and we gather up by the TV to learn the results of the election. Groan. Dread. But let me close with some photos of a lovely fall day before we have to pay attention to, well, you know. 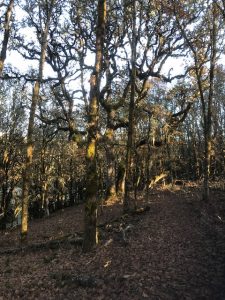 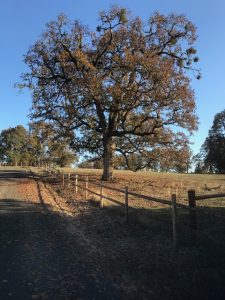