Today we will talk about vinca major. The pretty blue-flowered ground cover that we loved when we lived on 133rd? Not so much any more. Want to get rid of that city-lot sized patch down by the barn?

Yes, because the stuff is wildly invasive, and it gets into the creek below, it can spread over the whole hundred acres. Right up there with tansey-ragwort and thistle.

We hop on the net to learn how to manage the stuff. By “manage” I mean “kill,” of course. First suggestion, we can dig it out. The roots can reach 2 feet into the soil, and if we were to attempt this huge excavation, and missed the slightest bit of root or stem, the thing would be right back. Nope. We’re going with Triclopyr. Larry is at this moment whacking the stuff down with the brush hog, and will fire up the back-pack sprayer as his second act.

“Hmm. Triclopyr sounds like some poison chemical. Thought you guys were all about habitat, nature, conservation.”

I know. Didn’t know, however, how big the problems were when we went about all uppity talking about saving the land, etc.
Triclopyr isn’t exactly Roundup, but it is close. So, there we are. Chagrined, but on it.

Now we’ll change the subject. Peter packed up some California sunshine and brought it to us last weekend. He and his dad got right to work building planter boxes for veggies and flowers inside the orchard: 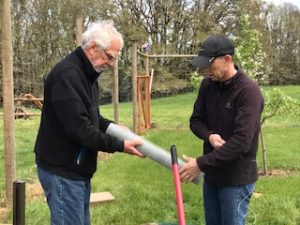 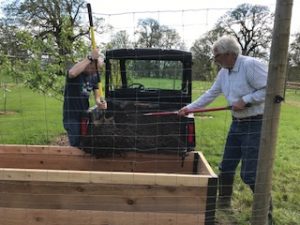 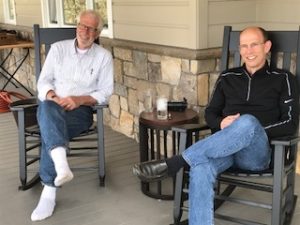 That was just the first day. On Saturday morning Peter donned the power-saw chaps and the two drove the tractor and ATV out to the downed oak site for some additional manly entertainment. Several more loads of latent firewood have been deposited in the barn to await splitting, and while Larry collapsed with a much-deserved brewsky, Peter drove to Eugene to spend time with his sweet Amy girl.

Our rescue chair has been completed and we picked it up yesterday. It’s, well, adorable. No, really, that is just the right word, no matter how over-used. It was meant to go in the Chick Room, but it settled into the yellow room instead and it would be cruel to move it. Look at that little bird! See, it’s adorable: 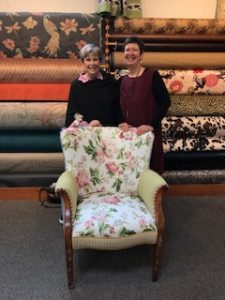 I’ve been taking photos with my phone, mailing them to myself, and inserting them into the blog. But I just learned that you can’t click on the shots and enlarge them, as formerly. Maybe I’ll have to go back to downloading the photos onto my computer, then moving them. Maybe next time.

Meanwhile, I have one more photo for you. The completed, planted planter boxes, or at least one of the two: 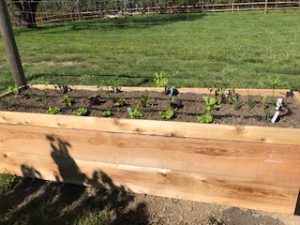 I have to say, it looks way better in real life.

My job today was to hose down the porches. I have just noticed that the area I cleaned looks no better than the area not yet cleaned. Message? Right. I’m way too old to do unnecessary work like that, so I’m off, instead, to check on the vinca project. See you next time!