Driving out on our errand run of the day, we stop to see how the road-side water tank is doing. Yesterday, the tank had run the well dry, sloped as it is so that the float, positioned on the high side, allows the water to spill over the low side all day. The tank has done this earlier, just up the hill, creating a huge cow wallow, which this new location had been intended to correct. But didn’t. Now we have a new wallow being developed as we watch precious water running down the pasture. 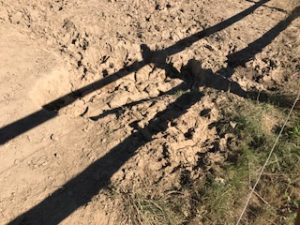 Obviously, we have to fix this. Down to the barn to turn off the electric fence, which threads just along the top of the tank, to pick up some pliers to turn the thumb screw holding the float in place. The hose has been crimped somehow, perhaps by the wind? And we wonder if the cows can negotiate the new float placement, which carries the hose along the lower edge of the tank with it. We decide to chance it, although put in a call to Ryan to see if they couldn’t find a way to level the tank. 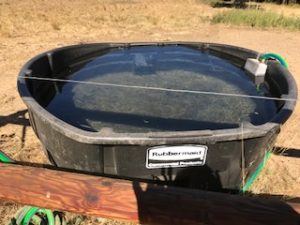 On to our chores, which include a trip to the DMV to pick up new tags for the Defender. I have the thought that the Defender might be more useful at the farm, but Larry resists the idea. He just doesn’t like change? Or perhaps worries that the Defender at the farm will deplete Black Butte’s powers of attraction, which at the moment include that gorgeous guy toy. Not an entirely baseless concern.

We stop at the bookstore to look for a German-English dictionary, to help me decode Ursel’s new book on Greek mythology. For a book on the eclipse, and one on making compost tea. We stop at several garden shops to find a kneeling bench, and finally, at the last stop, find the very one we passed over at the first stop, though for ten dollars more. The wide spectrum of a farmer’s requirements, duties, and interests here documented.

We grocery shop, we return for lunch. At this point I have to retire to the kitchen to prepare the paella salad I’m planning for dinner. Terri is coming over, and somehow the backup of freezer stuff from the big Open House party almost completely provisions this salad. But a lot of chopping, frying, etc., takes me most of the afternoon.

Larry comes up to the house to announce that the well has gone dry again, and he has turned off the connection to the cow’s tank. He’s frustrated, and remarks that I don’t seem very concerned (meaning that I certainly should be). In a bad mood he retires to work on his computer and give the well time to refill, if it’s going to. After half an hour or so, he decides to go back down and see. It has. He finished filling the barrels and comes up to take his shower and enjoy a cocktail before dinner. I am still unable to share in this pleasure, but maybe someday?

We sit on the porch for a moment, and Larry calls Jake-the-pump-guy. He’s had the idea that our existing well, the one below the woods, might be restored now in the way that the homestead well restores itself on being drained. What if it has been replenished, and might now resume supplying us with household water? Would we absolutely need to drill another hole, as the homestead well seems so dependable for watering? The driller is coming Friday to determine where to drill next Monday, so we need to test the first well in advance of his arrival. What does Jake think?

Jake thinks it’s worth a shot. We should drain the cistern water to a very low level, turn on the old well pump and see what we get. If the water clears, we may be in business. If not, we should use the dirty water on the trees and call for a new delivery from New Day. Timing is everything for this little game of roulette. We are leaving Friday night, not to return until Tuesday next, so can get by with no household water until then. We will decide what to do in the morning.

Terri arrives and we have a nice evening. After she’s gone home, Larry loads the ATV to take the garbage to the street for the morning pickup. The evening is so lovely that I sit on the patio to watch the moon, waxing now from a sliver, in the darkening sky. I watch the first star emerge, the second. I know that Larry will be filling the barrels with well water for the morning watering so don’t expect him for another 15 minutes or so. Finally I see the lights of the ATV and decide to walk down to meet him. As I get along the way, the stirring black hulk of a sleeping cow startles me, and I notice how very dark it is becoming. The slight moon is just enough for me to see my footsteps, but not the road ahead. This feels strange, both alarming and exhilarating. I give a moment’s thought to the things there might be of danger – a hunting wildcat? Nope. Nothing to worry about, except that now Larry has turned around and seems to be at the barn. The lights are on, have they been all along? Have to just keep going, then, and the barn lights are a comforting destination. I realize how rarely I am outside at night, alone. I mean deeply alone, with just the sleeping cows breathing along with me. I like it.

We drive back up to the house. Larry decides that we should water the orchard trees this evening, and though we’re tired, that is what we do. But it’s lovely. I stand on the bed of the ATV and scoop up a bucket-full of water, hand it to Larry. He takes it to each tree in turn. It’s utterly still, quiet. The moon balances on top of a tree silhouette, and I feel alive and close to the land in a way that lets me see this water crisis as an opportunity. For now, anyway!