Brr, just came in from siting the ill-chosen foundation plants from last spring. The 6′ rose that crowded out the gentle lavender, the catmint ditto, the peonies that bloomed alright, but not in the peony shape that we’d expected. Sigh.

“Seems like replanting is something you “farmers” could manage on your own. I mean, you self-prune trees, and so on.”

True, but it’s more complicated, in that the auto sprinkling system is involved, and the guys are here anyway.

“If you say so. What guys are we talking about, anyway?” 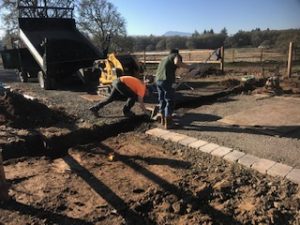 Allen and Vaughn, Landscape people. The spent several days last week working on the path, which looks beautiful under the recent blue skies. We thought a bench would be a good idea, and the amazing Allen just climbed a downed branch with his chain saw, and created a slab for the bench seat. 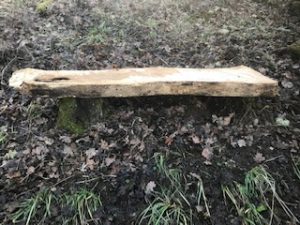 Here’s the path going around the corner: 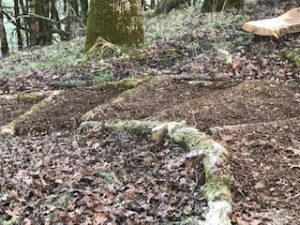 But what they’re doing in the first photo is completing the original driveway scheme whereby there will be a line separating the driveway gravel from the “courtyard” gravel, with two Japanese cherry trees on either side. I put quotes around the word “courtyard” because it suggests something far more genteel, perhaps European, than is actually the case. Like, we’re in Corvallis?

I was describing this to a massage therapist to whom we’d been referred after our Portland practitioner abandoned the field in favor of her on-line jewelry business. I know. She made more selling jewelry and teaching others how to make it than she could rubbing knots out of client’s muscles and bones? Guess so. Anyway, the new practitioner down valley, as they say here, reacted to my description of the path. “Is this something for the public? Like trails or something? For walking their dogs?”

I need to talk a bit about our weekend. What with one thing and another, we had Saturday off and decided to use the time in service of answering the question What Next? On the previous Saturday we’d had a meeting in our condo with a Portland realtor to help us establish a price, should we actually decide to sell it. This accelerated the necessity of deciding Then where we’ll go when we need to be in Portland. As our long-suffering friends will attest, we’ve been all over the map (literally), from Mirabella (retirement home) to a new but smaller condo in one of the many buildings going up around us, to an apartment in Charbonneau (village 30 minutes south of Portland), to Touch Mark (another retirement home) to the idea of just staying in a hotel as needed.

So, we took a tour of Touch Mark earlier in the month, and accepted the invitation to stay in one of their guest rooms for a weekend to give us the idea of what life in such a place would actually be like.

Readers. Those places are full of old people! Very friendly, welcoming, for all I know interesting, but it’s still a shock. The guest room was exactly like a hotel room, and was therefore helpful in illustrating that the hotel option probably won’t work. I forgot, for example, to bring socks and had to wear my boots barefoot all day. Annoying. We wanted to assess the food situation, and I have to report that lunch in the pub was delicious. But, $350.00 each per month? When we’re planning to use it as a weekend get-away?

Stay tuned. And yes, we do know that we are old people too. Thank you.

Now I’m looking out at the fence around our yard, where the old plants have been newly planted. Looks quite nice! The peonies were already sprouting new growth, which means that I need to get busy and plant the many bulbs we’ve been saving for the last couple of years. Problem is, I no longer know for sure which are tulips, which daffodils, as my sorting system has been the victim of heavy usage of the shed benches for tools, etc. And I want to go to the library — no, let’s be honest, I’ll be going to the book store — to find suggestions for foundation plants to fill the newly dug holes.

Lunch time. With Larry in Portland, I have an opportunity to clean out the refrig/freezer. I claim that I’m a good cook, and it’s fun to use my chops on all the left-over stuff. Which usually gets turned into soup, but today I’m looking a a remnant of frozen pigs-in-a-blanket from some long-ago appetizer, and some home-made, also frozen, Chinese dumplings. This is not promising for soup. Sort of a tapas meets dim sum? Oh well, it’s only lunch for one. Yum!