But we need the rain!

Yes, of course. And we’re Oregonians, so we don’t complain. A little funny, though, that Benton County said we could burn all day. Irony pinches, doesn’t it?

So we have traveled to the farm on Thursday this week to meet with Mark, the Cow Guy, but more about that later. First, we have many questions for Tyrone about the plumbing fixtures we’ve been working so hard to choose. At last we’ve found someone at George Morlan’s who seems equipped to manage the entire system of bathrooms. She tells us what faucet won’t come in what finish, what valve we must have in order to select which shower head, and what finish our choice won’t come in.

And so on. We arrive at the farm, in the deluge, duck into the now warm house and find Tyrone. Seems we need answers to certain plumbing-related arcana before we can proceed. Larry has the list, and we start in the upper, right-hand corner of the attic bedroom, determining which shower drain will fit which appliance. Who knew these things aren’t universal?

It’s fun to be in out of the rain, admiring the new shelves in the kitchen pantry, the moldings around the windows and doors. For a mysterious (as yet) reason, the upper guest bedroom has a regular cemetery of departed flies on the window sill, the floor. Why this room? Maybe one of our families will learn the answer when they visit us.

Our list checked off, we decide to take Bob-the-Truck out for a spin, to encourage the batteries. We’ll have our picnic lunch (that was an optimistic plan when I made sandwiches that morning). Forgot something back in the car, so Larry puts Bob in reverse. Bad idea. 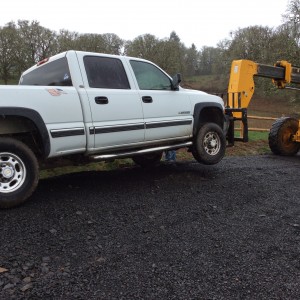 Dennis, Excavator-Person, has been telling us that our “autobahn” was poorly constructed. And in fact, soft spots, ridges, torn barriers, seem to support his opinion. Apparently there should have been “dirty” rock chosen that will compact and become interlocked. Our rock slithers around, won’t join hands with one another, and thus, when someone, like one of us, veers too close to the edge, it’s up to the axel with Bob. The rain has provided a muddy trench into which we slid. There would have been no exit, were it not for Tyrone and Eric. 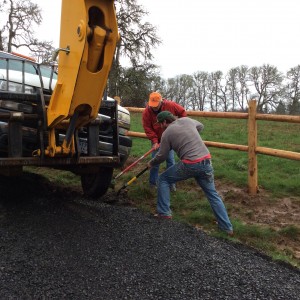 Tyrone’s giant claw has lifted the truck, and Eric and Larry man the shovels to create a gravel path back onto the road. 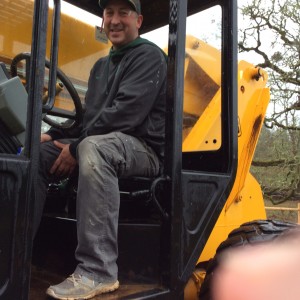 Tyrone looks like this is the most fun he’s had all day. Yep. Boys! But we love these guys and can’t imagine how we’ll run the farm without them when they pack up and leave for another job. 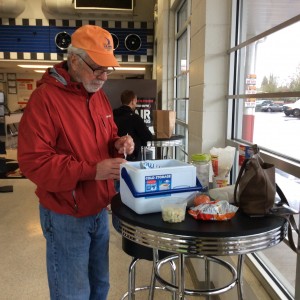 Here we are at the Corvallis Les Schwab. Got the batteries tested and gave the Schwab people a hearty laugh at our expense. Of course we needed both batteries replaced. “When did you get these batteries, anyway? Government junk pile after the Korean War?” Ha ha.

Back to meet with Mark. Well, he’s not interested in working with us under the new scheme. Not enough pasturage for his animals. Hmm. Sub-text, he’s no fan of Fish and Wildlife who, I suspect he suspects, has stolen a good chunk of private land in the pursuit of conservation. Mark is a good guy, and needs to do what he does, which is fatten cows to feed our relentless appetites for beef. So, okay. Got it.

I’m surprised to find myself a little relieved. Guess I resent what the herd had done to the property last year, with too many cows (my opinion about the correct number of cows per acre, which would be about one per). Still, what now? Checked in with Steve, our consultant, but haven’t heard back. Plan B, I guess. Yeah, I like this development, though I admit I enjoyed the picturesque quality the cows provided.

“A tone poem? And that would be what?”

I think it’s a kind of musical composition such as you might hear on your Pandora “Meditation Station,” minus the throaty bamboo pipes. But I’m thinking about it in terms of color. And it’s probably not best to blog about color when I can’t show you my photos.

YES. I took my fancy Lumix to the farm in the hope of getting better shots, and now can’t load the results onto my computer.”

Yeah. Tomorrow. Meanwhile, here we are. At the mercy of the written word.

Okay. We’ve been engaged in the challenge of finding the nice gray color that we (which means I) have been imagining from the beginning. I’m sure you all have experienced the inevitable frustrations at the way color changes itself from one moment to the next, from the Miller Paint store to the parking lot outside their shop to its final destination. The real problem, however, is existential. Gray, my friends, does not exist. A little tutorial: (Light is one thing, but we’re talking about pigments.) So “a red pigment is a material that absorbs all colors but red. Likewise a blue pigment absorbs all colors except blue. If you put enough of the right pigments into something it will appear to be black, as it absorbs all colors.” Thus sayeth Google.

So then, gray would just be the black you created plus a measure of white. Right? Apparently not. The minute you add the white, some one or other of the component colors will emerge, and while the paint chip at the store looks gray, be sure that when applied to a wall, for example, it will become blue, or green, or brown, or lilac. And ghastly.

So what’s wrong with a nice blue-gray, or whatever? Nothing. Unless the dark gray standing-seam roof you have caused to be installed on your new home turns out to be a nice blue gray. Fine. Unless the lovely gray sandstone you selected for the exterior wainscoting has proved to be, upon its application, a nice brown-gray. Neither of these features, the roof nor the wainscoting, can be changed. So. Blue roof, brown stone. And a “gray” that will lie happily between the two? Non-existant.

Enter Cactus. This is he who is putting the stone on the house, piece by piece. Good name, huh? He observes the seven swaths of color we’ve applied to test sections of the siding and sums things up. “The blue roof will reach into the stone, find the darkest shard and pull it across the intermediary field of color represented by the fourth-test brownish gray of the siding. This is the one you should choose.”

It doesn’t look gray at all, it looks brownish, but he seems to be right, and we give up. We will have a brownish house.

We finally arrived at the farm on a day when the county will allow burning, and began the life-time job of burning the slash oak on the property. Larry stood, rake in hand, shovel near by, in a meditative state, perhaps hearing a tone poem in his head, nurturing the small flame he could achieve with the wet wood, a happy man. I, more restless, roamed about gathering wind-blown pieces of plastic from the construction, and stumbled upon a little grotto in the woods. Insert photo here: sunlight on figures of collapsed wood entirely dressed in the greenest of moss. The gnome-like creatures arranged in a circle under an opening in the canopy, luminous against the drab of winter forest. Magic. I made Larry come and see the little people, but he was eager to get back to his fire. Hmm.

Somewhat enchanted on the ride back to Portland, absorbed in a book on Audible, we were embarrassed by a phone call from Gordon. “Where are you guys?” We’d forgotten we had a date to meet them for dinner before the play for which we had tickets that night. How dumb! How could both of us forget? I mean, we’re at that age, and all, but we don’t usually experience simultaneous fog. At least so far.

But we got back in time for the play, and it was great.