I wake up this morning to the percussive, pneumatic sound of fence-post driving. We sleep with the porch door open (yes, screened porch door) and the cool air makes me burrow in a little. I watch the long morning rays of sun turn everything gold. Five thirty-eight a.m. In the city, committees would form, letters would be written.

The sound seems to have stilled the morning bird song, and maybe it’s the absence that makes me understand that I won’t get back to sleep. Okay the, coffee. It’s the first day of summer, and if that fence crew can be up and at it, so can I.

I want to tell you about a little boy. Fence Guy Grant’s son, Anthony, about 8 years old, I think. He comes to work every morning with his dad, rides behind on the huge tractor, skid steer, whatever, with his helmet and ear protection in place. On Wednesday, during a discussion of a certain fence-post location, Anthony climbs down. We talk a bit and he tells us that he’s gone swimming in Muddy Creek that noon. Larry jokes that he should watch out for the giant fish. Anthony looks at his dad, like, what? “There’s only leeches,” he says with a shrug. “I just pick them off my legs.” Well. One tough little dude.

By yesterday, however, Anthony has been promoted to ATV driver. He roars around the fields with Ian (Other Fence Guy) behind, delivering, picking-up, or just joy riding, though actually I doubt that. “My Uber driver,” says Ian, “knows where the gas pedal is.” Sometimes Anthony talks to us lying supine across one of the fence rails, or disappearing into a ditch. Yes, he likes working with Dad. He has a little sister. “Pain in the butt,” he reports, thus dismissing her while stripping the seed heads from a stem of fescue. 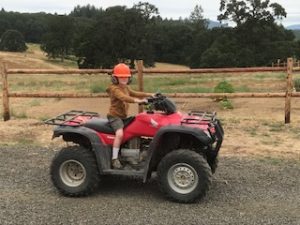 Walking up the road, my path crosses Grant’s. Great little boy, I remark. What a lucky kid, to have this summer life. “Yeah,” Grant says. “Get him up early, take him out here. Otherwise he’d just be at home playing computer games, watching TV.” We think about this for a minute. “People used to live with their grandparents, uncles, cousins, down the road in the same town. Everyone came together to harvest, build, whatever. Now everyone’s scattered. Kids don’t learn how to work.” I can’t argue with him, but can’t say he’s altogether right, either. Work at what? Different world now, for sure.

Peter and Andrew (son and grandson) came to see us for the day. They’re vacationing in Black Butte while the rest of the family romps around Paris with a crew of Lindbecks and kin, getting Amy safely off to Sienna for a summer semester abroad through UO. Photos are sent and they appear to be having a great time. Photos go the other way, of a day on Lake Billy Chinook, a boat, a donut behind. Peter and Andrew also having a great time. We do the farm thing for a day — retrieving the ATV from the shop, bouncing around the property perimeter, staking up the apple trees in the orchard. Hot dogs on the grill for lunch and all the Ruffles you can eat.

Forward to Friday, the plan was to split the wood lying athwart the oak copse, there from the unfortunate felling of half the homestead tree. Larry would get the splitter from the rental place and drive the thing, behind the pickup, to the site. This is hard work, some of the rounds being a couple of feet in diameter. We wanted to split the chunks into fire wood before the fence separating the copse from the house was in place. Larry is a stubborn soul, wouldn’t give up, so, five hours later, this is what one old goat and an aging crone managed together: 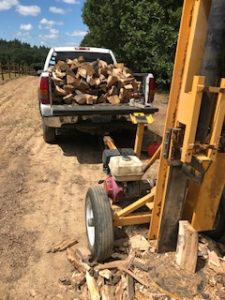 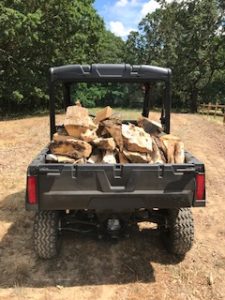 Note: the stacked pile represents only one third of the total, the wood in the ATV and pickup not yet unloaded. That will happen next week when the vehicular wood will be delivered to the barn.

We met with Sam Carter, arborist, in the afternoon to discuss a plan to thin a section of the copse that afternoon. This idea was under consideration from the first, but there is some debate about the health of the forest when just left to develop as it will. The Oregon White Oak has this shape when grown in the savanna landscape. This tree is at least 300 years old: 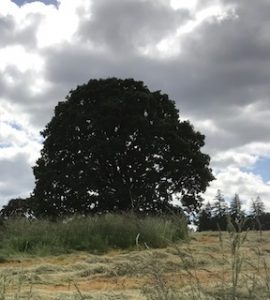 Presumably, early herds of elk and deer would have grazed the young trees before they could grow, and/or, native peoples used fire to maintain the grassy savanna. But in the copse, steep terrain, the trees have grown tall and narrow, competing for sunlight. There will be a few dominant trees and many smaller strugglers. The whole canopy is dense, and provides the appropriate environment for wild flowers. If we open the canopy too severely, we’ll get grass, instead. But what do the trees want? This is how they grew undisturbed. So we will attempt balance, clearing the sickly, misshapen, thinner trees, leaving the healthier ones to prosper. So we think. Sam will return next week with his mentor and we’ll all discuss what we should do. Reminding ourselves that their opinions may be colored by the prospect of a big job, and sobered by the thought of all that wood to be what? Chipped? Felled and split?

Next Thursday we’ll receive a bid, then decide. I’ll let you know how that goes. At the moment, (Saturday evening in Portland) a pizza’s in the oven. Beavers playing Mississippi State. Go Beavs!

I want to get right to the topic of hot dishes, as my hamburger is thawing in the sink as we speak. So, thanks, Martha, for the idea about stroganoff. Yep. And Kelly, I was pretty excited when I came across the recipe I most remembered from Grandma Viehl, the one with rice? Got it from Mr. Google. One can each of chicken/rice soup and cream of mushroom, plus 4 TBS soy sauce and 2 TBS Worcestershire? O.M.G, that’s it! Come on over, the recipe makes one pound hamburger feed a LOT of hungry Minnesotans.

Now, when last seen, Larry and I were trudging through the tall fescue. I’m disappointed to report that Ryan came and cut it while we were away, but when we got back, here’s what we saw: 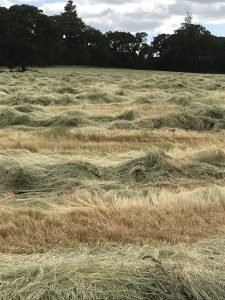 Amber waves of grain? See, this is not what those words have always brought to my mind, but it will be now.

Ryan seems to work on the weekends, and of course, we seem to be in Portland on the weekends, so we missed the next two chapters in our little story. I did see Ryan, or someone, driving a tractor through this field with strange whirly devices on the tractor front which whisked the waves into flat land, but the baling went on behind our backs. Rats. Would have like to see that! But here’s what was next: 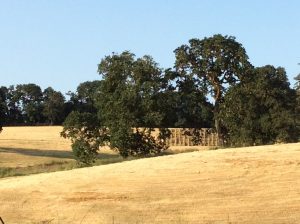 To give you an idea of the scale here: 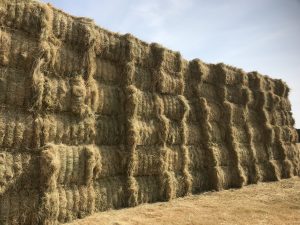 These bales each weigh approx. 1200 pounds. Each. It’s about equipment, baby. Look at this: 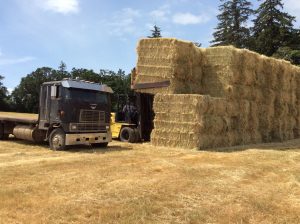 It took five trips to take this to the hay sheds Ryan owns, and here’s some exciting news: Ryan wants to pay us half in US currency, half in — meat! Larry said fine! Well, you know what’s for dinner when you come to my house.

This is not the only thing going on at the “Wood.” Remember the meeting with Ryan and the Grant (Fence Guy)? We agreed to start on the perimeter, and this whole past week our days have been filled with the sound of grinding, hacking, felling. The idea is to clear the land in front of the existing fencing, see what needs to be replaced, or mended, or what is good enough to keep. It’s really magic to walk along a newly created path — well it’s more than a path, more like a boulevard through a park. It’s so gorgeous. First, the machines: 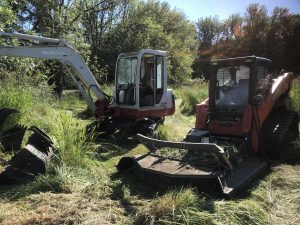 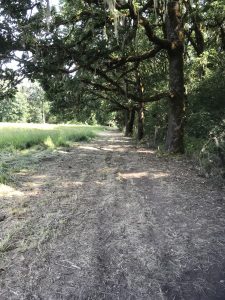 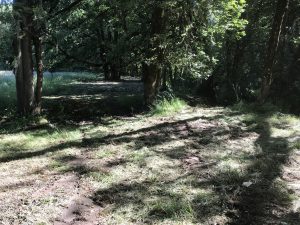 Hmm. Okay, maybe you have to use your imagination, hear the bird song, feel the hush of the ancient trees? I was going to go out and take more photos this afternoon, but, oops, it’s raining. What?

I’m sure you will want to hear how the Vision Garden is faring? Sorry to say, not so well. Apparently the long 13-day period of neglect in favor of a golf tournament has thrown our tomato plants into a sulk. Leaves curled, though they are getting enough water. Seeds didn’t sprout, ditto water situation. So, off to Shonnards for an explanation and, it is to be hoped, a remedy. Only remedy may be replacement. But our Master Gardener did not wish to give up on his babies, and instead, purchased four more tomato plants. Maybe twenty flower starts (instead of seeds), which he is ourside planting. Right now. Yes, in the rain. (We are Oregonians, after all — little rain never hurt anyone).

And as we drove up, we met Scott, the Guy who will be working to enclose our orchard more securely in advance of the chicken coop, which we ordered and now await. So we’re busy old folks, and in fact, when Larry finishes, before our hot dish supper, there will be naps!