The weather is good, let’s mow! We succeed in attaching the mower and make some hay. It’s rough going, and Larry has now become a convert to the idea of some spray and disc on the territory surrounding the house. But it looks a bit better and we’re feeling proud of our little tractor that could: 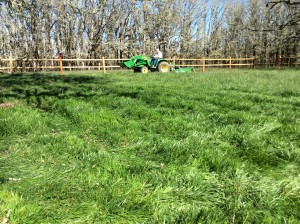 So how about doing the orchard? I ask. For sure, and I hold open the gate. Hmm. The tractor is a bit unwieldy with the mower attached, but Larry’s doing fine and gets a swath mowed (mown) when the devil jumps up. Seems we’ve located one corner of our orchard on a bog, which just about swallows our Buck. Larry throttles up, the wheels churn, and he escapes the quick sand, but at a price. In his effort to exit the scene, he forgets that the bucket is in the up position, and whacks the top post off the gate. No big deal, but that was one angry farmer.

We had earlier taken Bob to the car wash in advance of Gordon and Vik’s trip to arrange application of decals on the truck’s side. Gordon has created a gorgeous logo for us: 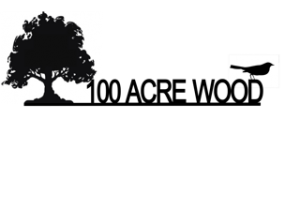 But Bob has had a muddy winter, what with a resident rodent chewing nest materials under the driver-side mat, with the oak logs with their moss and dirt in the bed. Needed a good cleanse before we could take him to the decal store. In the same spirit, we decide that the tractor could also use a bath: 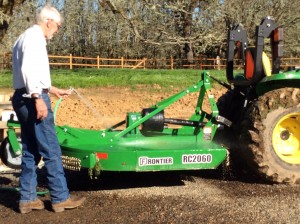 Vik and Gordon came, we took the shiny clean truck over to Talent where the logo gets copied and measured. And we wouldn’t waste an opportunity to get design input on the fireplace from these two friends. Much standing, head-scratching, thinking-out-loud, and we have a fairly clear idea of how to proceed with the proposed mantle we’ve selected. Dale, an apparent genius with wood-craftery, will have a look at the ancient chunk of oak to see if our idea can be implemented. And while at the reclaimed wood warehouse, will pick out oak planks from which to create our dining-room table.

Fast forward a couple of days. As Larry will be rehabbing his new hip for several weeks, we decide to make a last run to check on the house progress and build the compost bins for which we’d purchased some pallets. The house is indeed progressing, will be painted soon. Now, about the compost bins? In the first place, the pallet-outlet folks recognized an opportunity to unload some stock on the rookies (Was the truck too clean? What gave us away?) So our pallets are well-beaten, splintered, dirty, but they’re for compost, right? So who cares.

Larry determined where he’d like the bins, and made the discovery that there’s a large pad of concrete behind the barn. Overgrown with grass and weeds, but why wouldn’t we take advantage of this resource? It became my job to use the tractor to scrape off the greenery and dump it atop the manure pile. More compost! Kind-of fun tractor driving, though I almost took out one of the barn doors with the mower (still attached, of course). I am woman, hear me roar!

Well, the nails specified in the article on compost-bin building in Modern Farmer refused to penetrate the wood stock of the pallets without pre-drilling holes. Of course, we have a drill. At the farm. In the barn. A form of miracle right there, and we were able to proceed. But after building the first bin, we called it a day. It was clear that this project was larger than we’d expected, and we certainly wouldn’t want our real carpenters to see the pathetic job we did. That’s cardboard on the bottom to stymie the weeds, and left-over hay from the previous owners. It doesn’t look that bad, does it? 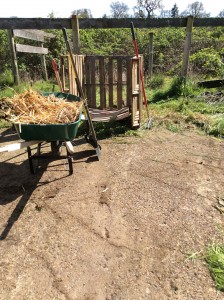 Now we wait while Larry heals, and hope the sun keeps shining!