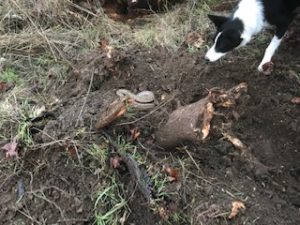 I’m not exactly afraid of snakes, but I don’t like coming across them accidentally. If there’s one in the barn, okay, I’ll just leave the barn. You can imagine the look on my scientist-entomologist father’s face when I once postulated, with all the wisdom of my 8-or-so years, that women are probably averse to snakes because of that long-ago unfortunate business in the Garden of Eden. My dad actually snorted at such foolishness, and I can hear him still.

Maybe you don’t notice the snake in this photo? The gray coil with the black stripe. No garter snake, this fellow. He unwound to about 3 feet, slowly realizing that he was un-hibernated and a very well behaved dog was watching. (Larry — yes, Larry — even commented that if he ever got a dog, it would be one of this dog’s brothers.)

Her name is Callie, and she belongs to Casey, who was down by the barn setting fence. The snake appeared when Casey pulled a snag tree out by the roots in order to facilitate the farm gate installation. This is where the cows will unload, if and when. But what’s important is that he also, finally, hauled away the tangle of fence post and rusted wire that had been decorating the entrance to the barn.

On the wildlife front, a New Year’s resolution has us walking Llewellyn to the end of Muddy Creek bridge and back, watching the river harvesting trees on her banks, swelling with the rains, and, to our delight, a river otter appearing just upstream from the bridge. Saw us and immediately submerged. Probably a nutria, scoffed my neighbor. Or mink, maybe. People! It was an otter.

Okay, Larry got the orchard trees pruned and then it was time to spray. While Larry has embraced the concept of out-sorcing the more challenging farm chores, he still reflexively goes straight to “I’ll do it” in many cases. And so it is with orchard spraying. However, copper sulfate, the spray authorized by organic farming, is pretty toxic. Must be applied before fruit buds are set, and the ground beneath the trees has to be protected. As you can imagine, no chickens can be present during the operation. So spreading the tarps, managing the fussy spray applicator, took more hours than the day has light. Had to be carried over to the following day, but he did it. Our trees are now safe from the fungal blight that has threatened the very life of one apple, one cherry tree.

Now the fun part. We had a long visit with Bill Peterson, Landscape Guy. We have wanted to add a couple of trees to the entrance gate at the lower end of the driveway, and at the point where the driveway gravel gives way to the courtyard gravel up by the house. Bill’s crew is good to go, we just have to see which trees he can source. Probably Japanese cherry up top and mountain hemlock by the road. Hold on! Just Googled mountain hemlock. Huge. We want an evergreen conifer, but? Maybe there’s a smaller cultivar? Will check. Anyway, the work will also continue on our path through the oak copse. And, just in time, the clouds are gathering. Won’t be as much fun to watch from under an umbrella. Just kidding about the umbrella.

Been thinking about our mission here. The plan is for Ryan to spray the low field along Llewellyn, then plant fescue or other forage. But our sprayed fields have been slow to green up this fall and winter. I begin to wonder if we haven’t strayed from the idea of improving the soil and veered instead to the raising of beef. The point of grazing is to manage the savanna/oak landscape, keep the grasses in check without fire or tractor power. But. How much spraying is too much? Yes, we have to reclaim the land from invasives, but has the cart gotten out in front of the horse? The whole plan is Fish & Wildlife conceived, so we have, in the vastness of our inexperience and stunning lack of knowledge, agreed. I think about our little otter, and the herons hunting frogs in the neighbor’s field, who have not yet tested our new pool but I have seen them contemplating a visit. What’s best for them?

Now Larry’s lovely chile is simmering on the stove. Chile Colorado, a Christmas gift recipe from daughter Jenny. I can hear the first raindrops and smell the bread rising. He prunes and sprays. He cooks, he bakes! Lucky me!

Name’s Rhoda. Not Edith, or whatever those humans-slash-people been calling me. Fuck’s sake. What kind of name is Edith? I’m hatched in Rhode Island, which isn’t even an island, in case you didn’t know. Rhode Island Red and proud of it. So I live here with my flock, which is Sally and Henrietta. Sally’s Barred Rock, so, salt of the earth. Good layer, knows which way’s up, so to speak. Henrietta, different story. All right most of the time, but every now and then gets up on her feathers and says she’s French. Gonna fly away from here, go where a bird can tell a grub from a slug, like who the fuck cares.

I’m the one on the left in this photo: 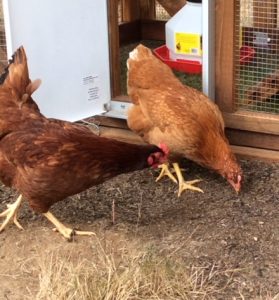 Our employees, those humans what work for us, come and go. And it’s just frigging cold and foggy around here, so our water almost freezes. What do they think, we can just lick the dew? What do they think we pay them for? Anyhow, the rooster-human showed up this afternoon right at laying time and damn if he doesn’t leave the door to the big world, outside the orchard where we live, he leaves it open. We’re telling Henrietta here’s your chance, go! Me and Sally were sure she’d make a break, which means, as you know, treats all around when they have to go chase her back. But no. Too cold, she whines. Annoying.

Just remembered something: This human who was around here last week when our humans were not, asked me if chickens have lips. How would I know? Lips? Never heard of them.

Jane here. Apologies to those of you who may be offended by Rhodie’s language. Salty little thing, thinks she’s tough. And of course, she’s right about her name. Edith was totally wrong, and although she probably won’t like me calling her Rhodie, she’s really not tough at all. First one up for treats, but both Sally and Hen push her around a bit. Still, I thought you’d like to hear from her.

And about the question of chickens and lips? I found this archival article in the Times on the subject:

“Some months ago, at a dinner party, toward the end of the evening, a young woman asked a young man, ‘Will I see you tomorrow?’ The young man replied, ‘Does a chicken have lips?’ That was the sum total of their exchange. She seemed to understand exactly what he meant. Was mystified and fascinated. He could have meant yes, no, maybe, unfortunately, impossible, or it all depends on the constellations of the Zodiac.”

Larry has been wanting to prune the orchard trees, and, as Rhodie noted, today was his first chance for weeks. We got home from Black Butte at noon, and though it was foggy indeed, he was able to get to the little pie cherry tree before he had to go consult with Grant (Fence Guy) about the plan for fencing around the barn. Grant will start the project tomorrow morning, so the year is off to a good start. Part of the job will be to haul the ugly piles of old fencing posts and wire which have been decorating the approach to the barn all summer. Hooray!

We’ve been wanting to start on the burning piles, but the ensuing fires would be huge. In the past we’ve hired a man with a bulldozer to do the fires, but the current piles don’t seem to meet the threshold for bringing in a professional, at least in Larry’s head. He’s probably right, it would be fine, but Grant told him that the big pile, by the barn, would be too close to the fence. We’d have to build a smaller fire on the other side of the driveway and thus burn the big one piecemeal.
That feels better!

And Larry did leave the coop door open as part of our plan to see if the birds will expand their territory, and if so, will continue to lay eggs in the provided nests in the coop. They’ve been pretty hard on the orchard grass, and we’d be happy to have them branch out. At least so long as they come home at “laying time” and at night. But they didn’t budge this afternoon. And so our education continues.

This evening we ran into town to the bookstore to complete our Christmas shopping, this time for David and Caroline. We think they’re at home in Kailua now, able to retrieve a package. We think. And now Day One of the newest year is nearly over. Fire burning some of our endless oak wood, nice memories of Christmas in Sun Valley, of New Year’s with friends, and with package from Altadena to open.