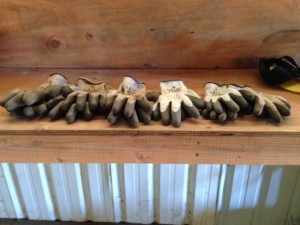 Peter and Andrew hire on! They drove up from CA for the weekend to help the aged p’s saw some wood, mow some meadow, repair stuff, drive the ATV, burn slash, and provide some family muscle delivering firewood to the barn.

Our best apple tree has been dragging the ground with its load of apples. A chat with the nurseryman at Shonnards and Andrew’s 6 plus feet on the ladder (Of course, I mean 6 feet of height, not 6 feet on the end of his legs.)(How tall are you, anyway, Andrew?) 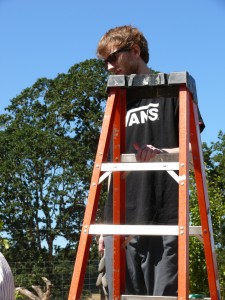 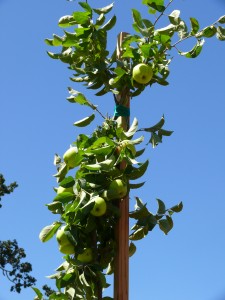 Peter is indefatigable. A wood pile and a saw? Just try to stop him. Larry says Peter channels my dad, and it’s true he learned his farm skills out on Dad’s filbert orchard in Newberg when he was a teenager. 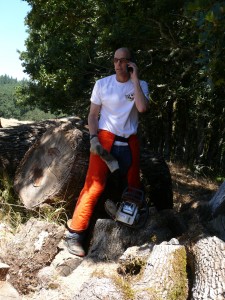 We couldn’t decide what to have for lunch until someone suggested that we run down to Safeway and collect some bread and peanut butter for sandwiches. Brilliant idea! Here’s the first meal prepared in our new kitchen. 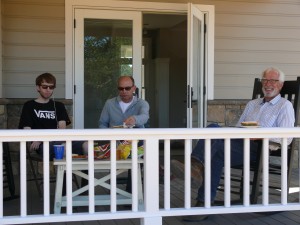 I had been concerned about the taste of the water from our well, despite the chem lab out in the shed standing between the hole in the ground and the kitchen sink. We’d acquired some ice for our lunch, so were able to make a preliminary taste test. The builder guys had said the water was fine, but they were drinking it from the hose, proving that their taste would be suspect at best. I was prepared to buy bottled water to drink if it came to that, so, found a glass, tossed in a the ice, and took a provisional sip. Didn’t taste anything. Seriously, it is fine, apologies to Eric and Doug!

Peter had been anxious about the water since his days at Dad’s farm, which did not benefit from the chemistry we bring to bear, so I was happy to relieve his mind. Apparently the well people provide the service of checking the filter and twirling dials on a regular basis to keep the water tasting good. Or rather, not tasting at all. Whew. (Yes, I know, this does not happen by magic. We sign a contract. Come on.)

Andrew drove the ATV around the edge of the forest collecting windfall limbs to clear the land for the F&W project on the land adjacent to the house. Got a good fire going, and we ended the day, watching to be sure no cinders could ride the wind into the dried grasses. “You going to come back up and work for us some more?” I asked.

“Absolutely,” he says. I think he has fallen in love. With the ATV, that is. Whatever it takes! 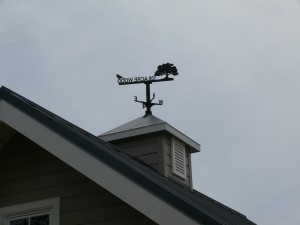 Hmm. Been more than a month since I opened my laptop to write. And it’s been two years since we began the adventure leading to a little house with an apple tree. So where are we now? Let’s start with the photo above.

Be sure to click on the image to appreciate the piece of art we consider the capstone of our project. Yes, I know, it’s backwards, but that’s the beauty of the piece. It smoothly, silently, moves with the wind and you get what you get, that is, the way of the wind. You all know this is a Gordon Davis piece. He’d have to tell you how he created it, but I can tell you how it was put in place.

June 1, a nice day, Larry is off at the Black Butte Invitational, thus unavailable to participate in the installation. Had to be that week because the big yellow forklift was scheduled to move on to another project. So Gordon and I loaded the pieces in the back of my little car and we were on our way. Dale and Eric were at the farm, and of course, they couldn’t keep their hands off the project. In the first place, one of them would have to drive the forklift with Gordon on board.

Problem. The mounting bracket Gordon had welded to fit the slope of the cupola was just off and had to be bent to the correct shape. Except the pressure snapped the weld. Okay, find a weld shop nearby, found Glen. Think: off the grid, junk-yard dog, metal carcasses everywhere, wild blackberries, and a line of 20 or so motorcycles bordering the property. Exactly what we were looking for. We sail up in my little silver Lexus — serious credibility mistake — but Glen, who asked that I take no photos, could give us an hour turn-around.

Back to the farm to put one of our front porch rocking chairs together, then a return to Glen’s emporium. This time, in Bob. Whew. Much more comfortable. And the repair job was fine, according to Gordon and all the welders back at the “Wood.”

So now the sculpture sits atop the roof, busy with its job of telling us the weather that is and is to come, looking beautiful. Thanks, Gordon!

Larry and I have been traveling, not just back and forth to Corvallis, but to Altadena to see our lovely Amy graduate Mayfield Senior Highschool. We actually flew (!), thanks to the calendar, and as you see, I survived. Amy will be attending U of O in the fall, Eugene being a scant 35 miles from the Wood. Hooray! How fun is that!

Time for another photo: 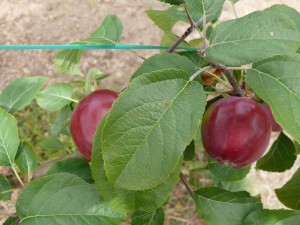 So when my sister Mary was visiting, she observed that we shouldn’t let the plastic tags around the trunk of the new little orchard trees stay in place, lest they choke the trees as they grew. Good advice, but I failed to make a note of which tree was which, and now all I can tell you is that these are either Gala, Liberty, or Pristine apples. Larry and I joke that we are in kindergarten with respect to our farming skills, but in truth, we’re barely into pre-school. As per the above.

And here’s our entire year’s crop of pie cherries: 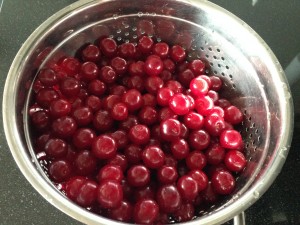 Made a pie (one pie), which didn’t set, perhaps inadequate portion of tapioca, but it tasted fine. Wait until next year! 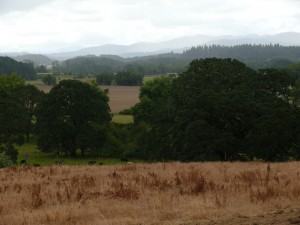 Here you see the result of our first large-scale conservation project. We had 14 acres sprayed, to kill all the invasives, non-natives, tansy, thistle . . . well, every living plant. This at the request of Fish and Wildlife, preparing a blank canvas onto which they will paint a combination of fescue and wildflower seeds. The idea is to encourage Monarch and Fenders Blue butterflies. It doesn’t look like a dead zone, just a golden fall scene with the cows in the background. Maybe that’s a bit over-poetic, but if you squint your eyes, that’s the effect. Next week, a contingent of folks from OWEB will be visiting the property to determine if we should succeed in receiving a grant for the larger acreage conservation. So, we’re underway at last.

Next is the newest addition to our ag fleet: A Polaris Ranger: 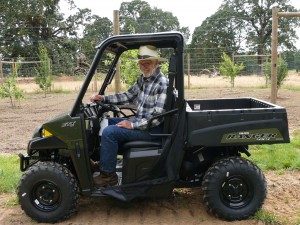 Was this absolutely necessary? Probably more so when we are in residence, working at the house, need something from the barn. Or want to spray the tansy and thistle in the pasture lands. We spent several hours this past weekend, Larry hitched up to the weed-whacker, I hauling black garbage bags behind to carry the morning’s felled tansy. Hard enough on the small patch by the road, hugely more difficult on the savanna. Have to say, still my father’s daughter, we’ve moved to the dark side and embrace the concept of spray to eradicate the years of nasty invasives. We’re encouraged in this apostasy by F and W, NRCS, OWEB — even the Nature Conservancy — with the argument that the greater good requires hard choices. 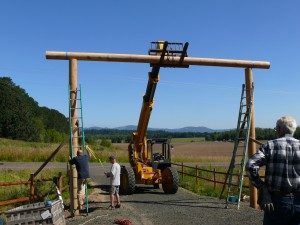 Here we have the frame for the gate. Looks like that fork lift thing is still on the place. Maybe Larry could have helped with the weathervane installation after all? We’ll have an ironwork gate between the upright posts, replacing the old-farm-gate-with-padlock now securing the road. There is supposed to be a system using our cell phones that grants codes to anyone wanting access. Let’s hope that works better than our existing electronic systems, and that Larry and I will be able to learn to use the technology in a fashion not really predicted by our history with same.

People ask me when we will “move in.” We aren’t “moving in” in the usual sense, but the meaning is clear. When can we expect to sleep and eat at our little house. We’ve been saying “in a couple of weeks” for a couple of months now. We’re living examples of Zeno’s paradox, the one where you must travel half way to reach a destination, then half of the remaining half and so on into eternity. (Don’t worry, I had to look it up.)

Tomorrow, Peter and Andrew will arrive to help out with some mowing, sawing, wood-splitting, weed control, and of course, this evening, it’s raining. Oh, fine. Well, that’s life on a farm?