The geese are flying these October days, and so I wonder. Geese fly south in the winter, don’t they? A quick trip to Google and I learn that yes, they do, but for many birds, the Willamette Valley IS south. The vast majority in the winter flocks are Cackling Geese, followed by Ganada Geese, Snow Geese, and so on. They circle around our property, heading, no doubt, for the Finley Refuge a few miles south. Cackling Geese? Yep, you should hear them!

But it seems that these fellows are not so welcome in our agricultural county. “Ten geese will eat as much as a cow,” says an area farmer whose wheat fields become home to thousands of the birds every year. And here we are, planning, with the help of USF&W to build vernal pools on our wetlands, to attract water fowl. Wait a minute! The situation is complex, having to do with hunting, a river delta in the tundra in Alaska, an international treaty, and the geese’s preference for Oregon over California.

Maybe Larry will have to add a shotgun to his list of farm equipment, and I’ll have to learn to cook a wild goose. Just kidding, of course, but obviously, we’ll have to dig a little deeper before we launch our conservation program.

Which is stalled at the moment anyway. I picture harried government workers hunched over their desks or investigating streams and swamps and hillsides all over Benton County, having little time to get on with Steve’s wonderful Conservation Plan. Meanwhile, we wait for the fields to green up — so that they may be sprayed, unfortunately, to eliminate the invasives and make room for the natives. Hard to be patient when we see all that has to be done. Example: Steve told us he was walking one of the fields and saw tens of mice or rodents of some ilk scurrying before him. What? Where are our raptors?

The house is proceeding apace, though. Photo below: 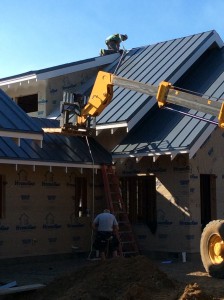 On Wednesday, we met with the electrician, doing the walkabout necessary to place light switches, in-ceiling cans, plugs, etc. Details for which we have now become responsible. Determining to avoid the mistakes in our present home (by which I mean digital controls which are complicated and malfunction often), we will without a doubt create new, unforeseeable problems and learn to live with them. A shout-out here to Gordon, who gave us the benefit of his experience and smarts. Everyone should have a Gordon in his life! (And a Vik as well, who has been holding my hand throughout this project!)

Met with the cabinet maker, conferred with the plumber, with Rod, our talented architect, with the butcher — (ha! just seeing if you’re paying attention.) And when it was all done, hands shaken all around, Larry and I were free to go. Guess where. Yes! Pepe’s, which is the John Deere dealership:

Just look at those little beauties! Larry had been told he might benefit from a “grapple” instead of a scoop in order to pick up all those piles of downed branches, berry vines, firewood. Great idea. Would require the purchase of the 48 horsepower model instead of the 32, in order to have front-end hydraulics. And how much would that cost? I’m sure you can imagine. So, no grapple. Much head-scratching and anguished brow-furrowing later, he wrote the check and walked away the proud owner of his very own tractor. It will be delivered next Wednesday when he’ll be given a tutorial on site. Don’t worry, Tyrone told him, he can teach him what he’ll need to know. (Tyrone is kind of a genius who can apparently do anything.) A new tractor has to be a real guy-magnet. I’m sure Eric and Doug would also stand by, except those guys (along with Moise, who may or may not be interested in tractors) work really, really hard. No time for kicking tires and offering advice.

First job: shoving the crib-cleaning detritus from the barn floor out into the back field. Where, with the rains coming, it may become rich fertilizer to work into the orchard next spring. You think? It’s a theory.

We go tomorrow to clean out more cribs (only 14 left), and because we’re promised a sunny day, and there’s no golf game. And Larry wants to saw and I want to rake over the trench dug through the forest and what could be more fun?

“Saw a skunk walking along the woods,” Eric tells us on Wednesday last. “He’s just strolling along, don’t know where he’s living, but he’s definitely set up housekeeping.”

This is lovely news. Larry is about to work on the stack of large limbs left by the arborists. And where is that skunk likely to be nested? Woodpile? Seems possible.

Undeterred, Larry cranks the saw. He’s determined to prove to his skeptical wife that he can muscle the oak around by judiciously choosing his targets. And seems to be succeeding when I notice that he’s working right on top of our little friend. I wave my arms to get his attention and call him over. We watch as Skunk waddles out of the pile and off into the oak woods. And, as he’s absolutely left the neighborhood, and the danger is over, Larry keeps on sawing. I’m very impressed, though still a little concerned. Peter, when you read this, let me know when you can come back!

Later, Dennis-the-Excavator appears to discuss the location of the drain field, and timing of the work. Dennis is the definition of local, so I ask him. What about the skunks around here?

“Bad and good,” he tells me in his singular voice. “We usually don’t mind about them down here because they eat the yellow jackets, which prey on the honey bees. But you don’t want them under your deck.” Dennis is not given to understatement, so, no, we don’t want ours under our deck. “Can trap ’em,” he says. “But I wouldn’t bother. Yellow jackets’re a problem. Got a dog?”

On Friday, Vik and Gordon came down to check things out, give us some help on thoughts about furniture, lighting, and art work. To our surprise, there is quite a lot of space available for art, which we hadn’t foreseen when looking at the plans. We planned on a picnic, but with the workers crawling about, decided to take our sandwiches up to Marys Peak.

But we were stopped by a ranger before the summit. Seems they’re logging there, and it’s closed to the public, of course. We may, however, have lunch at the little park just down the way. And surprise, there’s a nice clearing, couple of picnic tables, restroom, and the added amenity of a young man with a guitar. Music while we dine. We find a flat rock to serve as a table in the sunshine, open the wine. Nice! But here comes the forest ranger. He writes up a couple of notes on two cars parked there, and we prepare to abandon our wine.

Not necessary. Because this is Ranger Bob. Maybe 65 years, a full beard, by no means full set of teeth, a good belly. He’s quite gorgeous in this way. And, as it turns out, hilarious.

“How long have you been a ranger here?” we ask.

Ah. Good story. He was a heavy-equipment operator, but woke on his 55th birthday and decided to quit. Too hard on the butt, he explained. And decided to go to college. Study biology and forest management. Well, he didn’t decide that right away. He’d give it a semester, and with that in mind, went off to his first class. Got there early to be sure of a seat next to the door to facilitate his exit. Announced that he was there for the parties and the girls. Told us he had to take statistics three times before he could graduate.

Unfortunately I didn’t get his photo. A pure study in not judging based on appearance! A college man, he says he’s embarrassed by the Forest Service’s lack of grammar skills, as exhibited on the signage for Marys Peak. Someone has painted in the missing apostrophe, to which I have earlier referred. Ranger Bob claims that the Service is not allowed to attribute ownership to any governmental property. Thus “Mary’s” Peak has to be “Marys” Peak. I have no reason to doubt him, and it does clear up the difficulty.

We spent the night in Corvallis, after dinner at Del Alma. The White-Davises went off to Eugene to see their grandkid, Jordan, a freshman at the U. The next afternoon, our grandkid, Amy, along with Allison and another mom-daughter pair arrived after their tour of the UO campus for a tour of the farm. While we could wish for a longer visit, it was a lovely 17 hours! Fingers crossed that Amy may decide to come to school in Oregon!

And to close this report, I’m attaching a view of the house seen from the driveway: 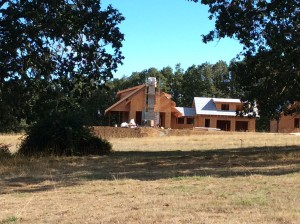 We’re heading back tomorrow to chat with the electrician. Not that exciting, but you never know!