I know. We were down in Ashland, and then up to Seattle, and

“So not much going on at the farm?”

Well, there is a lot going on, but it’s kind of boring to write about. Not much narrative thrust.

“Oh. Is this fiction? Do you need — what’d you call it, ‘narrative thrust’ in memoir, or whatever this is supposed to be?”

No, this isn’t fiction. Not really. Some fictional license, now and then. But, who wants to read about electrical and plumbing installation. Digging the septic system, trenching up from the well.

“What about that new tractor? Doing anything with it?”

Okay. Let’s start with Dennis, the Excavator-Guy. Remember him? He’s very fictional, except he’s real. Jolly. Quite overweight, brass voice. And he’s just a genius with his road-grader/bulldozer thing. Not sure what he would call his equipment, but he can snip the whiskers off a dime with the massive thing and make mud look like a Japanese meditation garden.

Drove up the other day and asked if we were raising coyotes now, as he’d seen two of our herd down along the drive. Funny. We told him Larry’d gotten his tractor, but that we were having difficulty managing the brush hog attachment.

Fast forward to yesterday. In the barn, shoveling out yet more — um — fertilizer, only using the tractor blade this time. Momma learns to drive. And it was pretty fun. I mean, the thing just has levers and pedals and you learn which is which and out the door with you.

But then, the brush hog. We had to get it connected in order to move it out of the way. This thing is HEAVY. You don’t just pull it along manually. You have to back the tractor up to it, exactly in line, then attach the power take-off and branch arms. None of this is easy, and it simply doesn’t work if the tractor is not perfectly lined up. Here’s the visual. Me, driving the tractor. Larry, behind, waving his arms and shouting above the engine noise to “go a little left.”

I get the thing in place and we attach the PTO, but the arms won’t both attach. Out of alignment. Much backing and forthing. Have to disconnect PTO and try again. Now Larry is just behind the huge tractor wheels, trying to hammer the arms home, asking for a little to the left, and I’m at the wheel of a massive, powerful machine. This, people, is scary! More than mindful that my dad died prematurely as a result of a tractor accident, I am.

But, finally, we did it: 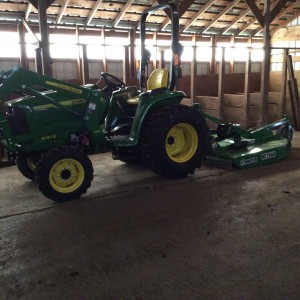 For all that, it was the barn which drew first blood. There are 4-by beams supporting the roof, and they stick out beyond their lateral beams about a foot or so, just at Larry Viehl head level. Of course he knows they’re there, and usually ducks, but, one time he doesn’t. Yells and swears, blood streams down his face. In a rage he finds his power saw and saws off the offending projectile. And me? I have this overwhelming, psychopathic urge to laugh. It’s NOT funny, it isn’t, and there I am, fighting back laughter. What is wrong with me?

Well, we wipe up the blood, pack the truck with the bags of tansy we’d “harvested” this summer. As I pull a bag away from the wall, a snake emerges! Yikes! I squawk — just a little yell, honest. The thing was 18 inches long, seriously. First snake, and I’d been hoping our farm was a snake-free zone. Apparently not.

I calm down and we and go to lunch. Then out to the dump, where we pay $17.50 for the privilege of depositing our so-called yard debris. “Next time, we burn it,” says my husband. His mood has not been lightened by the morning’s injuries. But we haven’t been able to burn, not for days, against the low clouds. County rules.

Now too late to do any further work, we head back for home, I driving so that his weary, pounding head can rest. And tho we planned to use a voucher for a free dinner at Toro Bravo, neither of us wants to shed the barn clothes, shower, and go out again. Fortunately, I have in the freezer, one more casserole of turkey tetrazzini, truly miraculous, restorative ambrosia. If you want the recipe, email me and I’ll share.