No sooner had I hit “Publish” to send my last blog when an incoming mail note from neighbor Terri informed me that we had missed the fire on Wednesday. And had Philomath Fire District contacted us? Whoa. Seems this fire was in the “park,” which is what the folks along Bellfountain call the county easement that separates their properties from ours. Terri had taken her dogs out for a walk on our property that evening, had noticed an apparently burned piece of wood in our grasses, just across from the fire, and would inform the fire department that it was there in case they hadn’t noticed it previously. No one knew how it started, maybe a spark from an engine? People had heard an ATV along the edge of our property last week, had our fence people been there?

Hmm. Feels like we’re being set up to be the culprits here, doesn’t it? Larry immediately jumped on the ATV to have a look at this “burned” piece of wood. There was a piece of fossilized wood from ages past which may have looked recently burned, but not on close inspection. And yes, Ryan, Cow Guy, had been here putting up a run of hot wire around our barn, so, yeah, the neighbors probably heard him.

Wait! Back up. This fire was in the park! Not on our property. Was put out by the fire department. Though Terri told them she’d take them onto our property through the recently created gate between us, they declined the offer. So what’s going on?
Got it. 😠 WITCH HUNT! Ha!

No, I know this was scary for everyone, and it’s perfectly natural to want to know the cause, so this is me, taking a deep breath.

We had to be in Portland for a couple of days, are back now, working to put things back together after our absence. But first, you remember those cukes I dumped? We bought another batch, took care of them properly, and making pickles moved to the top of our list. Making pickles is something I do with my bestie, Vik, but we couldn’t get our schedules coordinated, and cucumbers wait for no man, so Larry had to fill in. Did an excellent job, too. Nine jars of dills and bread & butters, looking good. And where are we going to store them? Hmm. This is bad. Means we have to get those two new stand-alone pantry cupboards for the garage. Is there room in the garage? Only if we move the current shelves which hold extra garbage bags, shoes and boots, etc. So where does that stuff go? Remains to be seen. In this way, one job begets another. Almost Biblical?

Next up, yellow-jackets. According to the nice bee-keeper Larry ran into at Shonnards, it’s a bountiful year for the unpleasant insects. Not enough freezing weather to keep their numbers down, then the long hot spell, all the rotten fruit on the ground, whatever. We wouldn’t care, but they won’t leave us alone, making it impossible to be outside when they’re active. So. Yellow-jacket traps. We have 4 hung around the area we like to inhabit, like our garden, our porch. Not the orchard, where there are millions of them, as we’re cautioned not to hang the traps around food. The activity is mesmerizing. Hundreds of the beasties swarm around each trap, desperate to get at the attractant, whatever that is. If they determine how to get in, they can’t get out, and soon die. Cruel? I guess.

But come evening, they cease and desist, and the land belongs to us again. We spent the evening watering the fruit trees, which we weren’t able to get near during the day. The crickets have begun to sing at dusk, a sign that fall is upon us. (Yes,I know they don’t actually sing.)

Excuse me, but what about your chickens? Weren’t you so eager to get home from the Baltic so you could get your little family of chickens?

Yes. Do you remember that old rhyme about the house that Jack built? This is the cat that killed the rat that ate the malt, etc.? It’s like that. We can’t get the chickens until we can move the coop. We can’t move the coop until Grant can bring his skid steer to lift it. He won’t bring the skid steer (to build the last fence as well as move the coop) until Jarod has dug the pond, and Jarod can’t dig the pond until Ryan discs and harrows the field, and today’s news? Ryan’s tractor has been hit by a car on the road and won’t be repaired until next Thursday. Any further questions?

But now, the Golden Gophers are on TV, playing New Mexico State, and all farm activity is hereby suspended. Go, Gophers!

Home again! I’ve just dumped 5 pounds of pickling cukes into the pit (wait, I haven’t told you about the pit. I’ll get to that) We picked them up at Sauvie Island Thursday afternoon, fighting jet lag, and it said right on the bag: Take cucumbers from bag, refrigerate, and use within 2 days. But did we listen?

But a word about our trip. Fourteen days cruising the Baltic Sea. We do know better than to leave our garden in August, and the only reason we would do such a thing is friendship. We were celebrating Ursel’s birthday, and wouldn’t miss it for all the apples in our orchard. So it was a fascinating, magic, frustrating trip! See, it was a special “German language only” cruise. I’m about 1/4 literate in German, Larry not at all, so it was deep immersion. Very deep. But to see the German cities, Russia, and the beautiful Estonia, Lithuania, Latvia was powerful, even if we couldn’t understand a word the tour leaders were saying about them. Look at the difference between a Russian port and a Lithuanian: There’s such energy in the lands who were freed from foreign occupation, who retrieved their own languages. 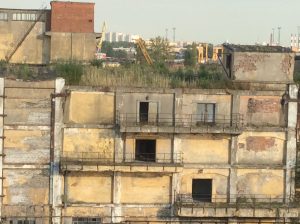 Finally, though, my homesickness worsened and I was desperately happy to retrieve my passport and climb on the plane. Yes, me. “Don’t be such a house-cat,” my mom used to admonish me. “Where’s your sense of adventure?” I believe my sense of adventure is hiding out somewhere along with my naturally curly hair, blue eyes, and that 3 extra inches that would have let me reach the top shelves.

So here we are at the farm. Good news: Look at Larry’s flowers! Our prune tree! (Yes, I know, the proper name is “Italian prune plum”, just like “hazelnut” is the hoity toity “proper” name for filberts.) We have a modest collection of pears ripening in the garage, some excellent squashes, and massive cabbages. (I just learned that it’s possible to can sauerkraut without a pressure canner, so if I can succeed in making some, we’re golden.) Yes, we like sauerkraut. 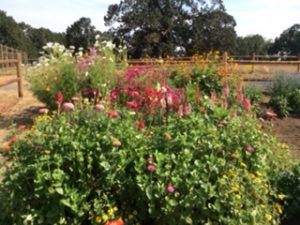 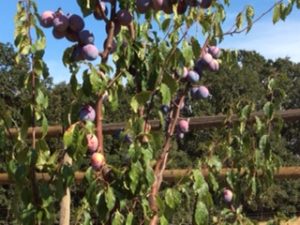 Some bad news: Those trees were thirsty! A yellow-jacket disputed my rights to the pear tree, with an itchy, swollen arm as result. Don’t know how she’s doing. I’d show you a photo of my stung arm, but that would be weird. 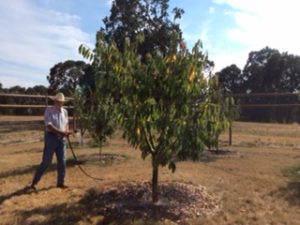 Some really bad news: Here’s a photo of a huge tree I’d decided was the grandfather tree on the property. For perspective, look at the fence around it. I know it’s a bad photo, sorry . . . 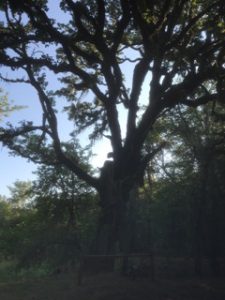 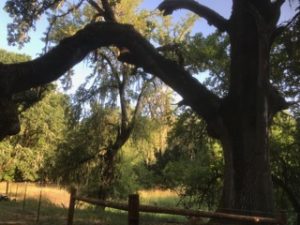 We took a walk around the perimeter this morning, and here’s what we found: 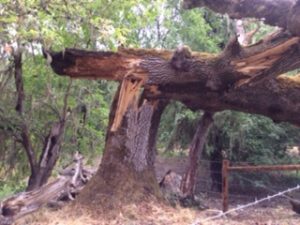 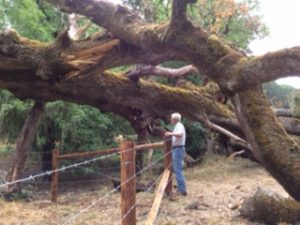 We can hardly get over the size of the thing. At least it tip-toed around the fence instead of crushing it, but it seems unstable, and while we’ll ask Sam, our Tree Guy, I don’t imagine we can just let it lie. The tonnage of the it. We don’t know when it went down, if there was a heavy wind in the area, but it is just nature being Nature, so while it saddens me, I have to accept the loss. I guess we always have to accept loss, hey? Sometimes I say pretty dumb things!

But now it’s afternoon, we’re still tired, so nap time at the Viehls. Oh yeah, I said I’d tell you about the pit. Seems our earlier composting efforts were useless, but we had to provide for the garden debris that would be forthcoming. Like spent tomato vines, sunflower stalks, and so on. Yes, we have yard-debris collection, but that means hauling stuff down to the barn, then out to the road. I remembered how my parents disposed of garbage by digging a deep pit. Aha! We had Ian, working on the fence around the garden, use his excavator to dig a trench at the back of the garden, where we can toss things like, well, garbage, of the non-meat variety. Sounds disgusting, huh? But oh so correct for people posing as conservationists! Next year’s lovely compost!