If you’re going to be a part time gardener, you will need to have an automatic watering system. First, the new stone planters behind the patio.

In my head: This should be easy. We’ll just get Allen to come over and plug in to the foundation system he already established. A couple of hours.

In Larry’s head: This should be easy. I already have left-over widgets and gaskets down in the barn. A quick trip to the hardware store for some soaker hose and connector brackets. A couple of hours.

Guess which head was in charge. Yep. Those left-overs? Wrong size. Soaker hose? No, better idea. Punch holes in the main line and run auxiliary lengths to each individual plant. A second trip to the hardware store for quarter inch line, another hole-punching tool because apparently a weasel made off with the one we already had. Stakes, which aren’t stakes as you and I know them, but u-shaped wire doodads which hold all this auxiliary line stuff in place. Many hours later, done! No reason to pay some expensive gardener person to do what is so simple that a child could really do it.

Now for the Vision Garden: well, back to the hardware store, of course. There is some urgency to these projects as the Vision-meister will be away for 13 days, and all those fledgling tomato and squash plants? But he did it! Not sure about the blood, but for sure at the cost of sweat and tears: 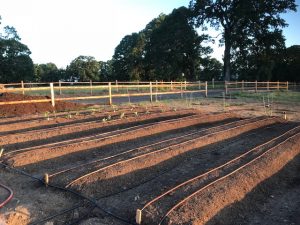 But we had been devoting time and energy to the garden and house at the expense of the greater, conservation projects. We were lucky to catch both Ryan (Cow Guy) and Grant (Fence Guy) for a meeting concerning the wider acreage. Decided to focus on the eastern half, down along Muddy Creek, where Grant would have to employ his dozer, brush hog, skid steer, grapple, to clear the riparian forest area for a perimeter fence. Grant says he can get started next week. We are becoming accustomed to the pliability of language as related to time, so hope he can start sometime before August.

Meanwhile, it would be important for the homeowners to identify and stake the two stand-pipes in the eastern quarter, where tall fescue has been growing all spring. Ryan may be able to hay the area to reclaim the forage, which cows will not eat as it stands but will be happy to eat in the barn next winter. But the fescue stands taller than the water pipes, and should the combine roar by and decapitate the pipes, the well would run to depletion before the pipes could be repaired. No!

So Larry and I set about to find the pipes and flag them. Here’s what that looked like: 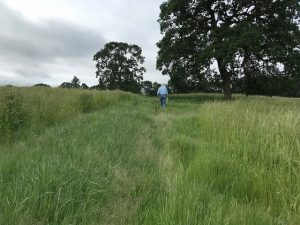 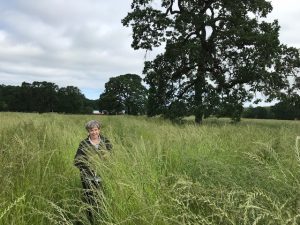 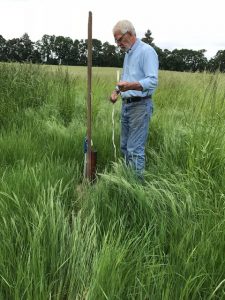 It was an adventure, walking where you could not see the land below your feet, where there may be snakes. Larry said “Snake!” and when he got the reaction, said “don’t worry, he’s gone.” Yeah, but gone where? I’m really not good about the snakes we see, but when they’re just sitting there on the road, for example, okay, it’s interesting to observe them, but at large in the world? Ugh.

Safely back at the homestead, we called Ryan to see if we could come by to pick up the first installment of the meat which we’ve bartered for his grazing rights. We had not yet seen his holdings and were astonished by the number of huge machines parked in front of an assortment of barns. He’s an astonishing young man. His mom and dad owned the property, got a divorce, and when Ryan was 19 years old, his mom gifted him her one-quarter share of the farm. He got a federal Farm Loan to purchase the rest. He’s been running the operation ever since. Says you can either to to college to learn, or go to life. He earned an expensive year of college credit when he changed the system of feeding his cattle vegetable by-product from broccoli to cauliflower. Forty cows dropped dead, and he learned that the rumen of his animals could not tolerate the change in the Ph factor of the two. Now he custom-feeds animals from the coast dairy operations, moves his own herds across the valley, was taking his bulls in that morning to be tested for semen before turning them loose among his cows. One bull for twenty-five cows, he says. Nice work for the bulls!

And we came home with 23 individual packages of grass-fed hamburger, assorted steaks and roasts. His idea of what two elderly farmers might eat in the course of the next months. Been searching my mid-western memory for hamburger hot-dish recipes. If you have a favorite, post it on the comment site! (Or e-mail it to me.)

By the way, I love your comments! I’ve decided not to re-comment but I promise you, I look eagerly to see if you’ve posted anything and consider your words my reward for sending this out into the atmosphere. Thank you! And see you next time. We just learned that Ryan is over on the property, beginning to cut the fescue. It will look so different when we return!

3 thoughts on “The Part Time Life”