As it is at this moment, IT POURS. Both metaphorically and literally. Been a busy week here at Lake Woe . . . I mean, at the Wood.

Starting at the end of last week, Peter stayed another day after tucking his daughter Amy into her new digs at the U O campus. He planned, I believe, to to a little sawing on his eponymous wood pile, but his dad had other ideas. Mounds of dead berry brambles heaped over long-ago downed oaks create a wonderful habitat for various song birds, and a big speed bump for the pasture renovation. Hector to the rescue. Which reminds me, I haven’t told you about the name changes for our equipment. Tractor is now Hector. For the obvious reason. The men worked all day Saturday: 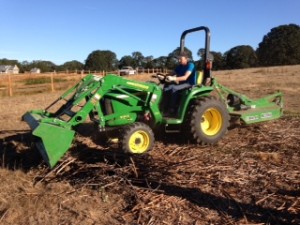 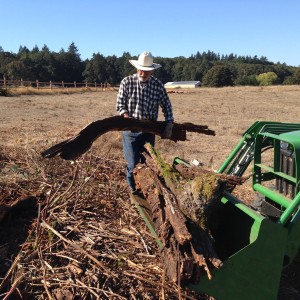 On Sunday, Peter flew home and we returned to Portland. On Tuesday, we learned that Matt, Fence-Guy, had completed the fencing around the house which we had conceived as a way to differentiate homestead, settlement, from the pasture and restoration acres. Also as a way to keep the cows off our back porch. This is a photo of the little people-passage creating access to the future paths in the oak copse. 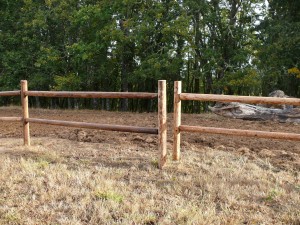 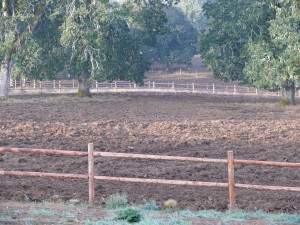 And on Wednesday, Bad Brad arrived to paint the barn! (It’s he who calls himself “Bad,” not my idea. Though he can be pretty grumpy.) That misogynist description, lipstick on a pig? Pretty apt, here, though I mean no offense. At least the barn is clean and no longer Baby Poop Yellow. You decide if it was worth it: 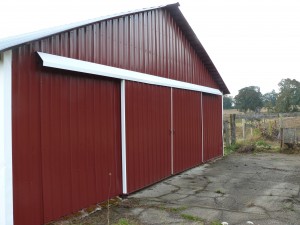 Let me introduce Bill Peterson, our “landscape” Guy. Unless we wish to surround the house with a football field of mud through the winter’s rains, we need to have some sort of “yard.” After some on-line research, we found Bill, and he’s visited the site a time or two. The second time to adjust his vision to ours, eliminate fountains, fieldstone patios, flower beds; he absolutely got it. Has good suggestions, we suppose, for laying a little sod for the immediate winter, after amending the underlying clay. We discussed the orchard, and the need for some under-planting, and he led us to seeding with rye grass. Which was going to need to be watered while we are away celebrating Allison’s birthday. No problem. We provide the hoses, he’ll bring sprinklers — but of course, the recent rains have obviated that plan.

Switching to Thursday, we received notice that our seeds were ready to be picked up from Heritage Seed in Salem. Road trip! Took a while, even with our nav system, to locate the collection of sheds, barns, greenhouses that is Heritage. Inside, we were reminded of nothing so strongly as Farmcraft Chemicals — which my family will recognize as my dad’s ag chem plant. Missing only that smell which flavored our childhood.

The botanist, an earnest woman who didn’t bother to brush her hair that morning, told us how they curate seeds for the Stinger Mix which we had been told by F&W to purchase. Heritage plants are grown, tested, nurtured (not genetically altered, these are HERITAGE) and finally selected by their ability to ignore the glyphosate (think Roundup) which must be applied. An herbicide is necessary if these ancestral plants are to compete with the invasives thriving in our pastures today. Below is a photo of $9000.00 worth of these precious seeds:

Or not, because my miserable computer won’t allow me to move photos this morning. What the? Excuse me while I go out onto the porch and tear my hair. Yes, I know I’m supposed to download version 4.6.1., but when I do, will I ever be able to post again? So sorry, Apple does not support Word Press. And who does? Try WP’s website if you want to enter computer hell.

But I want to get this out to you-all, so will forge ahead without illustration to say that Ryan has come, has disced the entire 14 acres, and our land is transformed into 14 acres of lumpish good dirt. He says it’s good! Been undisturbed for ever, first time under cultivation. Historic, really. Now we await even more rain so that he can harrow the land in preparation to receive the above seeds. OMG, it’s really happening.

And our new gate is mounted! Awaiting Applegate Door Guy who will come and install the electronics to operate these lovely pieces of powder-coated steel. This will replace the sagging farm gate which must be manually operated, using a padlock for security, every morning and evening. In the rain. Hooray for the 21st century! I hope I do not celebrate in advance, thus condemning the thing to failure. Well, at least, thanks again to Gordon, who introduced us to Randy at C.H.I.P. & Dale’s Iron Works. Must be an inside joke. But he did a great job, and you would also be impressed if I could show it to you. 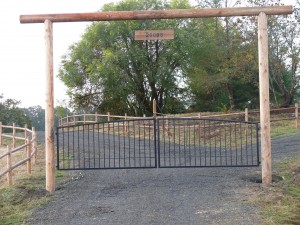 Well, if there’s a joke, it’s on me. Now my computer is perfectly transferring the photos. I’m editing my earlier post, so have a look if you want to see the fence and gate. Now, shall I update or not?

2 thoughts on “WHEN IT RAINS”