First, because we can’t drive the truck across the mud to the stack of wood. Larry proved that in an earlier attempt, during which he but narrowly escaped the indignity of another rescue tow by Tyrone and Co. The tractor should be be able to muck across onto the grass, around the orchard, and over to the pile of cut logs.

Second, because it would be possible to load the logs into the bucket, not possible to hoist them over the edge of the truck bed. These fellows, some of them 18 inches to two feet in diameter, a couple of feet long, wet oak? Peter could lift them, and did, but the other two of us? Ha. 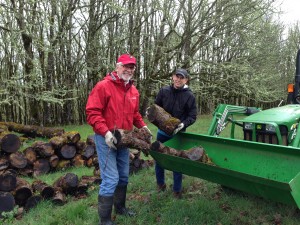 But mostly it was just insanely fun to drive the loaded tractor over to the truck on the road, lift the bucket and dump the load into the truck bed. (While I did get to drive the truck, the boys owned the tractor. As, on occasion, a log would tumble out onto the tractor’s hood, I didn’t complain.)

Therefore, the plan was executed and the wood moved to the barn. Well, not without some ingenuity in crafting a plank bridge to span the mud soup, and stealing a few buckets of gravel from a gas line excavation. Of course it rained. But I was proud of us.

“What? Your kid does all the work while you stand around waving your arms?”

He meant that kindly. And Peter was awesome. He is one cool person and you are lucky if you know him.

So we had rented an hydraulic splitter from a shop down the road. Seventy-two dollars for 24 hours, and don’t be late or there’s a fee. This thing rolls down the road behind old Buck smooth as ever you please, and Larry was right to decline the offered insurance against road accidents, whatever. We set up in the nice, clean barn, doors opened at both end, ear plugs attempted and rejected as useless. Those cribs we’d cleaned make fine ricks for storing the split wood, by the way. Photo to follow.

This splitter was a big deal. The maul travels up and down a tube and splits the wood with steady pressure. Nothing explosive or dramatic. Except it was pretty dramatic to see one of the above- described behemoths split apart. We couldn’t help laughing at the power and efficiency of the machine. Of course, not all the wood was straight grained. Lots of knots, twists, spirals, and those pieces, while they gave in to the inevitable, didn’t make easily stackable fire wood. Still, we estimated that we put up two cords in the two days. 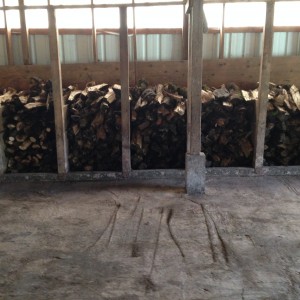 But there was the power saw, and there were those un-cut logs lying alongside the fence, and Peter was on a mission. While Larry and I tried to burn more of the slag piles, he marched through the downed wood and looked with some longing at the huge monsters cut last summer when Shonnards took out half of the homestead tree. 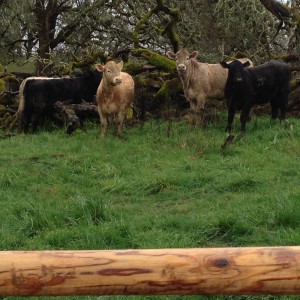 They’re back. They look forlorn in the rain, caked with mud, spooked by any approach. (I just wanted to take their photo, though I also harbored a desire to hose them down and offer them in a nice bed of straw somewhere.) They are just babies still, and have spread out across the fields, so I have no idea how many of them are spending a few months with us. If it ever stops raining, Larry would like to do some mowing, take down the spent stalks of weeds that the cows wouldn’t eat last year. I see the land through my vision of the future, but honestly, it looks pretty ill-used at the moment. Some sunshine would help!

The house is almost complete, the conservation and habitat restoration are underway, and it’s been a year and a half since we launched this project. How are we doing? We’re like, well, kind of old, you know? Last week we went to a memorial service for a man for whom Larry’d worked all those years. He looked around at his former colleagues and noted that they’re all a bit beat up and weathered. “Jesus. The last ten years must be hell,” he commented. “Look at them. They’re us.”

But I say “So?” We all know that the last thing may be just around the corner. Something hurts and guess what? When we started we said that we didn’t care. We have that day, this day. Nothing else matters. But of course it does. You fall in love again, with life, with the cows, with the fawn lilies. Repeat after me: We have tomorrow, we have at least this. Let’s live. 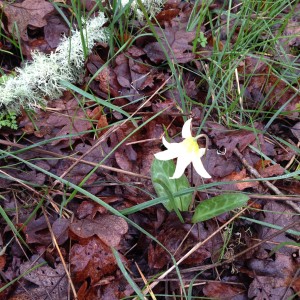