When we arrived on Friday morning, Lee had already begun work with his big yellow excavator. Stop! Will wasn’t there yet, and the whole adventure had been planned to coincide with a school holiday so that he might see the show. He would have preferred a fire, but we were unable to accommodate him in this idea.

Lee, a most amiable young man, turned to work on the garage until the Ederers could arrive. There are seven members in that little family, four people, a dog, and two cats. Eddie, a French bulldog, was included on this day, but the cats had been left behind. On their arrival, Lee was introduced all around. Eddie began to inhale all the wonderful sheep essence lingering in the barn and the people turned to watch the excavation exhibition. First bite: 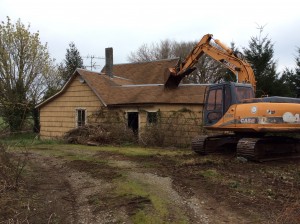 The house seemed made of balsa wood, shattering, splintering with no resistance. We were all surprised at the ease with which it came down. Then Lee asked Larry if he would like to have a swing at it.
Yes! Really? Larry has no experience managing huge equipment, but boys everywhere would envy the chance. Here he is learning a new trade: 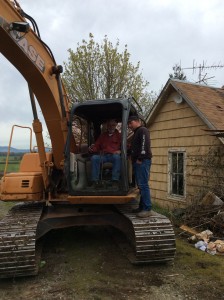 He reports that it was thrilling, but was alarmed when the whole machine seemed to rock on its treads at impact, and was glad enough to climb down. 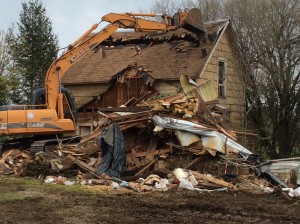 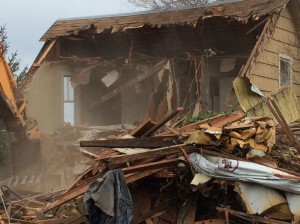 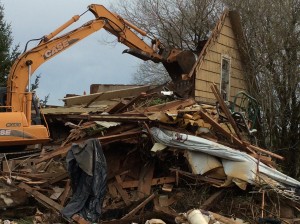 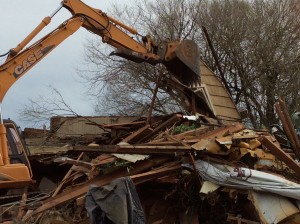 And how did I feel, watching? I should have been touched at the pink sprigged wallpaper in an upstairs bedroom. A mom wanting a pretty room for her little daughter. A TV antenna on the roof, so a little family watching I Love Lucy, or Father Knows Best? (Remember TV antennae?) I wasn’t touched. Someone had planted an apple and a pear tree, someone may have planted all the daffodils, or baked a pie or fed the chickens, but nothing remains to tell us someone lived here. Just an ugly old house, now gone.

Time for lunch. Tom and Jenny decided that Eddie could stay behind, and closed him inside the orchard fence with food and water. He’ll stay there, they believed. But of course, he didn’t.

Gone missing. The kids called for him, and Tom decided to drive down to the house (ex-house by now) in search. The lost puppy, however, soon arrived in state riding up the driveway in Lee’s pickup. Seems Eddie, no dummy, had, on his abandonment, trotted down to see his new friend. Who thought it would be fun to have the dog in the cab of the excavator with him while he worked. A dog’s life for sure!

Larry and Tom got to work on the new gate. Alli got to work driving first Bob, then her family’s SUV. Fourteen-year-old farm kids need these skills. 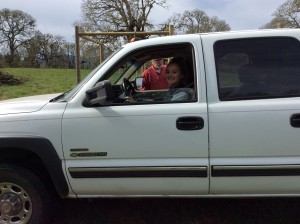 Then it was time for Jenny to take Eddie to his overnight stay at Virginia Woof’s back in Portland. The rains began. Tom and Larry stayed to complete the gate. 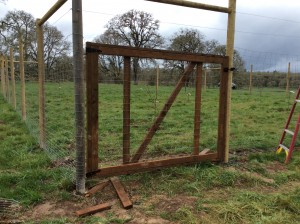 Good job, guys! A shout out to Aaron, who let us keep the all-important drill another day.

On Monday, Lee came back to complete the job of loading the debris into a series of drop boxes, which were hauled to the dump. I suspect it’s not a lovely scene, not yet. But in my imagination, the trees are trimmed, grass rippling in a breeze, the daffodils bright. Maybe this is where I’ll have my roadside fruit stand?